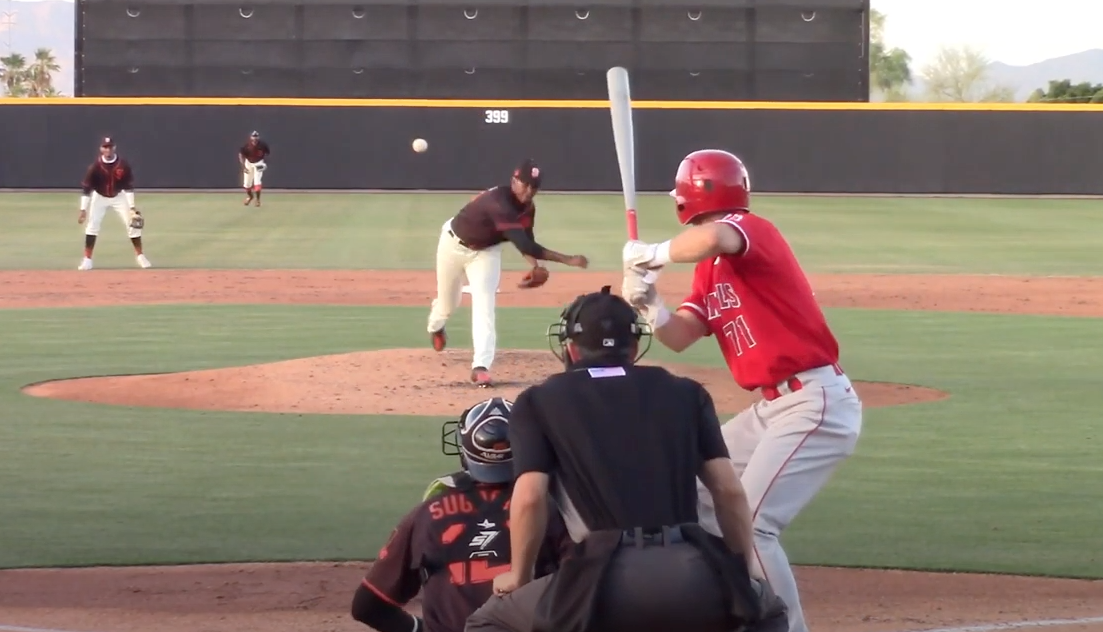 Notes
We’re starting to enter an uncharted evaluation context for young pitchers. Big league fastbll usage has been trending down over the last several years but breaker-heavy approaches to pitching haven’t been as pervasive in the minors during prospect development. Especially for pitchers like Florez, who are at best on the starter/reliever line, teams generally make an effort to try to develop fastball command that will give the prospect a chance to start. Per Savant, Florez got 20 swings and misses last night, most of them on his curveball, which he threw a ton. Of his 84 pitches, only 27 were fastballs. He threw about a dozen changeups, while the rest (nearly half his total pitches) were curveballs. I have conflicting thoughts around increased breaking ball usage — how much of the improved results generated by more breakers is coming from what is essentially per-pitch stuff quality, how much is from increased unpredictability as we exit the era of “establishing the fastball,” and is there a point where so many breaking balls are being thrown that the unpredictability piece regresses? — but seeing it on a Low-A arm forces me to view his performance in an unfamiliar context as the Pirates have a 21-year-old lean into what he’s already good at rather than try to improve what he’s not. Now, for Florez specifically, taking this approach at this point in his developmental track makes sense because even though he’s only 21, he’s Rule 5 eligible this offseason and a year from now all he and the Pirates may care about is how he gets outs coming out of a big league bullpen, which will feature him throwing a ton of his breaking ball.

Notes
With all the injuries we’ve seen this year, it wouldn’t surprise me if Barnes ended up making spot starts; he’s likely to hang around the upper levels of pro ball as a Tommy Milone-ish presence. He’s regressed a bit athletically since college and his delivery has become very upright and stiff, but Barnes still executes a good changeup to the same spot, over and over again. He only sits 88-91 and his slider is more like a slow cutter, and yet here he is shutting down a Triple-A lineup.

Notes
This is just to note that Mitchell returned from a knee injury within the last week. He had a great big league camp from a results standpoint. He has the toolset of an everyday player even if his swing never produces the kind of power you’d hope after watching him take BP.

I caught an Angels/Giants Extended game last night and saw two terrific teenage pitching prospects in the Giants Manuel Mercedes (18.7) and the Angels Alejandro Hidalgo (18). Mercedes was especially exciting at a very loose 6-foot-3 or -4 with something approaching a prototypical starter’s frame and a tailing fastball in the 94-98 range. His delivery is not in that prototypical space, as you can see in the video below. Certainly some of this is the Giants jersey talking, but Camilo Doval is a decent delivery comp, and I think Reds righty Luis Castillo is, too. I had a scout who saw Mercedes last week comp his looseness to Jacob deGrom, and after having seen Mercedes and deGrom within days of each other, that’s actually not crazy.

Due to the incredible arm speed Mercedes generates and the length of his arm action, and because the two delivery comps that come to mind here are a wild reliever (Doval) and a unicorn type with maybe Earth’s best changeup (Castillo), I did come away from the look with relief concerns due to the delivery even though there are starter traits present in his body and athleticism. Because Mercedes’ fastball has tailing action, even at 94-98 it has less margin for error that those with carry and perceived rise. This fastball shape fits best with a changeup and I did see one nasty 91 mph cambio from Mercedes last night, but his secondary of choice right now is his slider. It’s in the mid-80s, his feel for it comes and goes, and he back doored two of them. There were times when, thrown one after another, the divergent movement of Mercedes’ fastball and slider made hitters very uncomfortable. The command piece of the puzzle is more important for pitchers with lateral action fastballs, so that’s a developmental key for Mercedes. It was 105 here yesterday and these kids are just getting stretched out, so I think it’s fine that Mercedes has had a inning rolled here and there. He has been added to the Giants list over on The Board based on my look last night.

Hidalgo, who turned 18 a couple weeks ago, will have prominent placement near the top of the 40 FV tier for the upcoming Angels list. He sat 93-94, flashed several plus curveballs, and worked to his arm side with an upper-80s changeup. His changeup command is advanced but the action on the pitch is not great right now. He tried to work several of them under the hands of righty batters and a bunch of them were hit hard even though Hidalgo hit his spot. His curveball has depth and bite, and several of them were plus. His frame (well-composed but less projectable than Mercedes’), delivery (head whack, more general stiffness), and fastball command pull the profile toward relief. Hidalgo is on par with the sort of high school arms who get $1 million bonuses in the draft, with a bevy of solid components but without the sort of premium athleticism or projection that portend potential impact growth.

Is Ryan McMahon Finally Breaking Out?