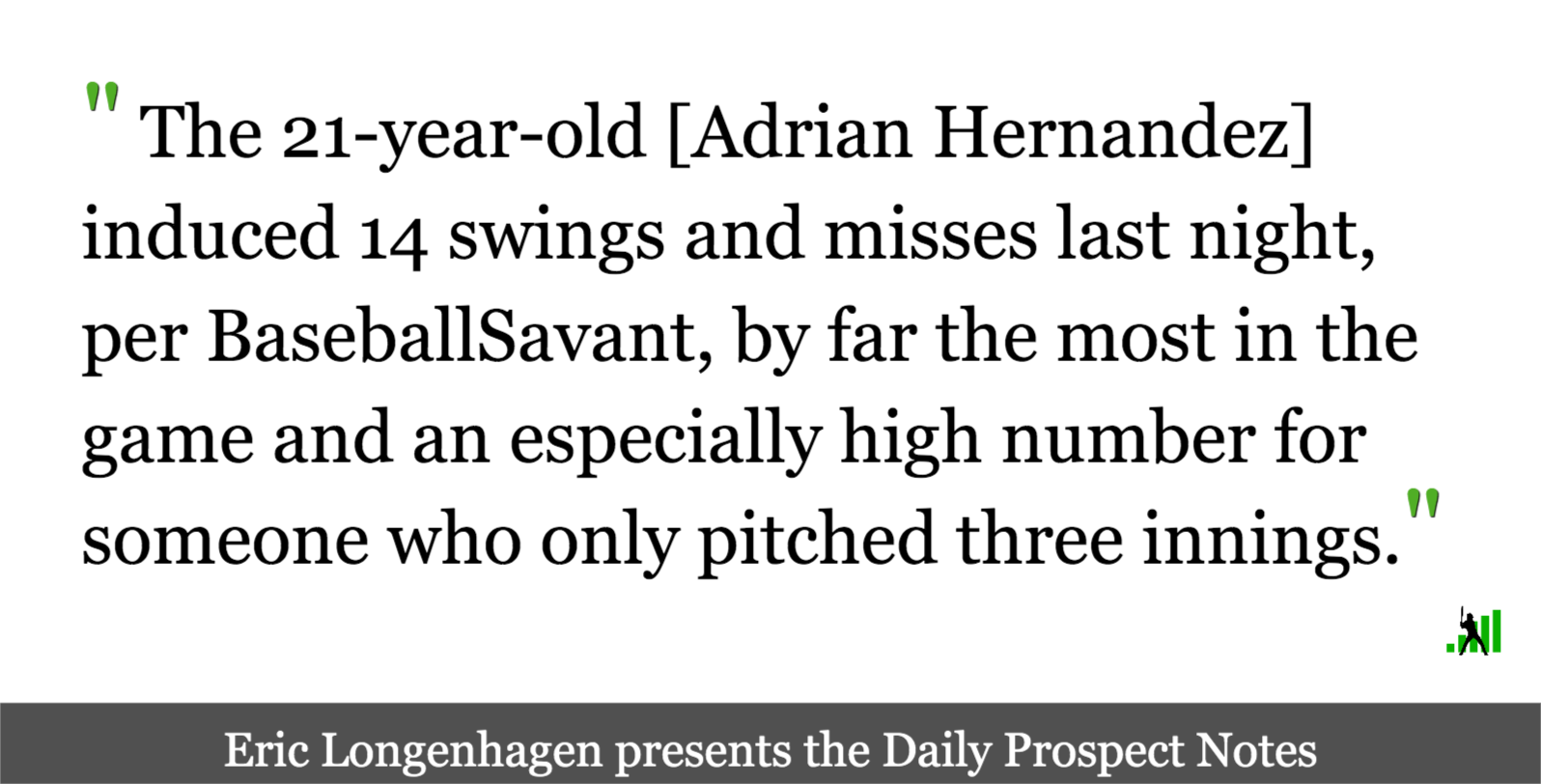 Notes
The 21-year-old Mexican righty induced 14 swings and misses last night, per BaseballSavant, by far the most in the game and an especially high number for someone who only pitched three innings. Of the 52 pitches Hernandez threw last night, a whopping 24 of them were changeups, which is how he garnered most of those whiffs. Interestingly, Hernandez’s changeup is of the high-spin variety and tends to finish to his glove side, which at first glance made me wonder if it was being labeled correctly by Savant, but this is indeed Hernandez’s changeup and it has been very effective. His strike-throwing has been a bit of an issue this season and there’s little body projection here, but Hernandez is a young-ish arm with an out pitch and viable arm strength, so he’s worth monitoring.

Notes
Bishop has had a couple of strong pro seasons, especially 2018 when he barely walked anyone. Last night’s start was by far his best of the season to date, likely aided by the quality of Hartford’s opposing lineup. Bishop tends to be 88-91 with some deception created by his delivery. He has two distinct breaking balls, the superior one being an average mid-70s curveball. He also has a sweeping, low-80s slider and an upper-80s changeup, each of which are shy of average. It’s a spot starter lefty look.

Notes
There are legitimate reasons to question Curry’s start. He is, after all, a 22-year-old coming out of a major program (Georgia Tech) who was given a conservative assignment to Low-A and is facing hitters who are less experienced than the ones he competed against in the ACC. But Curry’s performance has been dazzling. He has a 38-to-4 strikeout-to-walk ratio across five starts. Drafted in 2019, Curry’s first affiliated games came in 2021 because he dealt with shoulder inflammation in his draft year. He appears to be getting down the mound a little bit better now than while at Tech, but otherwise he appears unchanged. His vertical arm slot creates angle and carry on a fastball that plays well at the letters even though it’s in the low-90s (Curry was 89-92 in college, but has been more 91-94 this year), and his arm slot helps create vertical action on both of Curry’s breaking balls. I’ve added him to the 35+ tier on the Cleveland Board as his ability to locate viable, if unspectacular stuff, has a backend/spot start vibe right now.

Notes
Like so many others, Olson had a pretty substantial velocity spike during the gap year and has seen his fastball velocity band go from the 91-95 range to 93-97. That extra velocity complements an already deep coffer of secondary pitches, which are so good that scouts disagree as to which is the best. His two-plane, 85-87 mph slider and power changeup, which rests in about the same velo range, are both plus pitches while Olson’s upper-70s curveball is merely above-average. I still have some trepidation regarding Olson’s delivery. He’s a stiff-legged, tightly-wound athlete with more mechanical violence than is typical for a starter, but even if those visual biases turn out to be meaningful, we’re talking about a high-leverage and/or multi-inning relief piece here based on how his stuff looks right now. Were the 21-year-old Olson at a Big 10 or ACC school, he’d be in the mid-to-late first round mix.

Notes
I’ve been low on Eder basically since high school when I saw him touch 97 a lot but have zero feel to pitch. I saw the same guy in college (though I’d often see Vanderbilt the first weekend of the year, so maybe he was rusty) except usually with less velo. Now he’s been pushed to Double-A and is having success as a starter, albeit in just five, abbreviated starts. In 24 innings, Eder has 42 strikeouts and 12 walks. A walk every other inning is enough for me to continue to push him toward a relief bucket, but single-inning relief may come with sustained mid-90s velo. I’ve added Eder to The Board as a 40 FV single-inning reliever. There’s a chance he makes his big league debut this year.