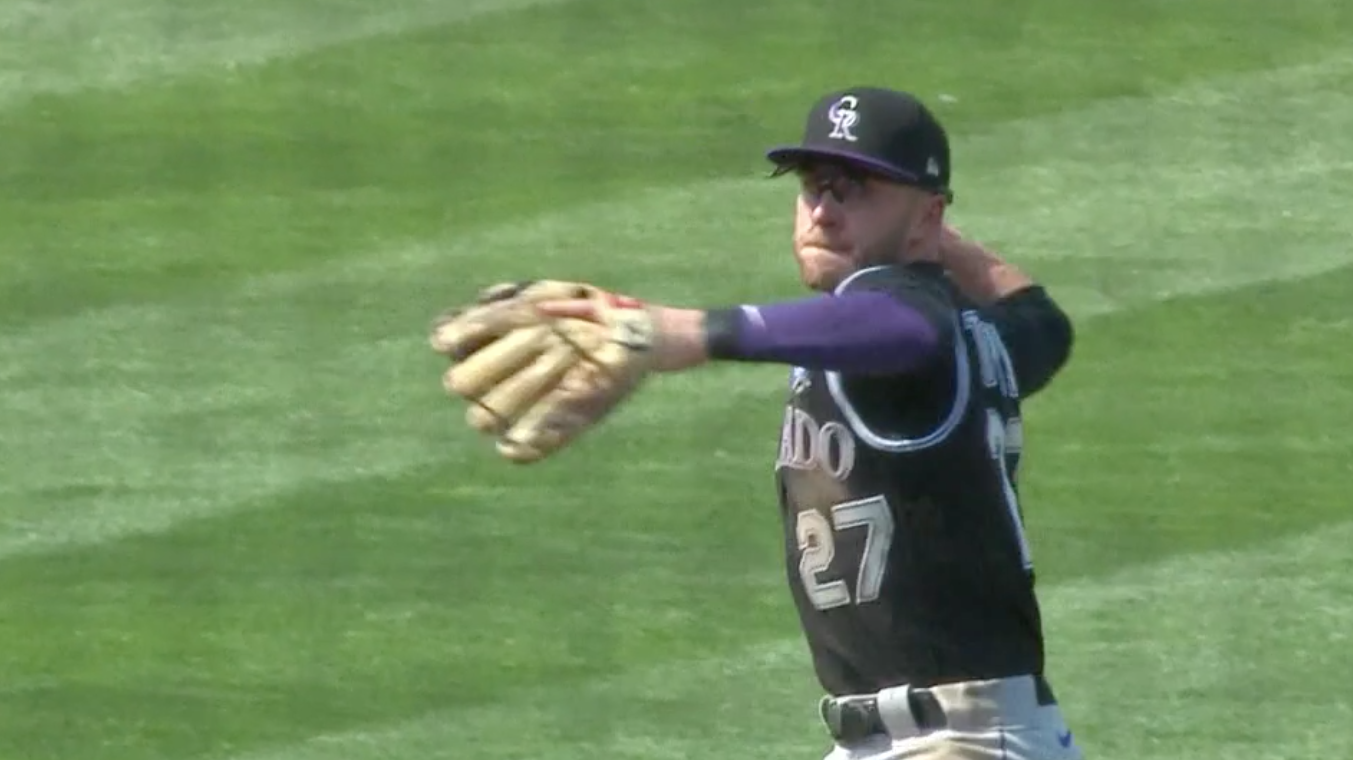 As if the Rockies Needed More Trouble, Trevor Story Is Injured

With disastrous free agent signing after disastrous free agent signing, and then the trade of Nolan Arenado, the Rockies have already fallen into irrelevance, even if their 20-34 record isn’t actually the NL West’s worst. As if they needed more problems, star shortstop Trevor Story has been sidelined by inflammation in his right elbow. At a time when his production has already fallen short of expectations, the 28-year-old shortstop’s injury — which recalls a late-2018 scare — could have a significant impact upon his trade value.

According to manager Bud Black, Story began experiencing tightness and pain in his elbow and forearm following a play against the Mets in the second game of a doubleheader last Thursday. Fielding a grounder off the bat of Cameron Maybin in the third inning, he ranged to his left, spun, and threw a one-hopper to first base in time for the out.

Story left the game in the middle of the fourth inning, without fielding another ball or coming to bat. He did not play on Friday, and was placed on the 10-day Injured List on Saturday. With the Rockies in the midst of a week-long road trip to New York and Pittsburgh, the team planned for him to undergo an MRI on Monday, once he returned to Denver, to determine if the injury is more severe. At this writing, the Rockies have yet to share the results with the public, but the early indications are that this isn’t a worst-case scenario; Black characterized Story’s injury as “not as bad” as one he suffered in late 2018 (more on which momentarily). Via MLB.com’s Manny Randhawa:

“Trev and I and [head trainer] Keith [Dugger] spoke this morning, and we decided the best thing for Trev was to go on the injured list,” Black said. “There’s still some residual soreness and general tightness around the joint of the elbow. He wasn’t gonna play today, probably wasn’t gonna play tomorrow, and then the off-day. And then the three of us also thought there’s gonna be a couple days to test this, to go out in Denver and throw and hit at some level of intensity as opposed to just picking up and playing.”

Story has been through a similar sequence before. On September 17, 2018, with the Rockies in the midst of what turned out to be the successful pursuit of an NL Wild Card spot — and their last season above .500 — Story felt a twinge in his elbow after making a strong throw, and left the game in the fourth inning, complaining of tightness in the elbow. The Rockies were concerned that he had sustained damaged to his ulnar collateral ligament, raising the specter of Tommy John surgery. Fortunately, the MRI did not reveal any ligament or other structural damage, and he was able to return to play later after missing just five games while showing no ill effects; he homered four times and slugged .897 over the Rockies’ final eight games.

Story isn’t hitting the ball all that hard; in fact his average exit velocity and hard-hit rates are career lows, with the latter placing in just the 31st percentile. His groundball rate and groundball-to-fly ball ratio are both career highs, though the differences from his previous body of work aren’t huge:

While Story’s expected stats have all been fairly consistent in recent seasons, from 2018-20 he was generally able to outdo his xBA by about 30 points and his xSLG by about 70 points thanks at least in part to the extra carry the ball has at Coors Field. He’s lagging behind his x-stats this year, which at first glance might suggest that he’s been playing at less than 100%, but could also have something to do with the new ball.

In fact, a look at Statcast’s expected home runs leaders and trailers suggests that Story has been particularly hosed by some combination of the new ball and the fence distances at Coors Field. He’s hit five home runs, but based on his launch angles, exit velocities, and directions (though not environmental variables such as elevation, weather, and wind), he should have 12; that seven-homer shortfall makes him the major league leader:

Based on Statcast’s park-by-park breakdown, which accounts for differing distances and wall heights, but again not the aforementioned environmental variables, Story could have as many as 18 homers if he were playing all of his games at Yankee Stadium. By comparison, his 11 homers last year were just two short of his expected total, while his 35 in 2019 were four short of expectations, a gap that tied him for 24th in the majors. All of which is to say that it’s definitely out of the ordinary.

If Story’s current injury is nothing more than inflammation, presumably he’ll return to action sometime in June — perhaps after missing only the minimum 10 days — and can take advantage of the warmer weather to reassure potential trade partners that he’s fully healthy. A pending free agent after the season, he had not discussed an extension with the Rockies as of late February, and at this point, why would he given the team’s mishandling of the Arenado situation — which resulted in a trade that included the team sending $51 million to St. Louis to take their star third baseman — not to mention its general lack of direction and pleas of poverty. If healthy, Story figures to be one of the top impact players available at the trade deadline.

Even then, and even given that he has already been connected to the Yankees as a potential trade target, Story’s market might be limited, because when one runs through the list of playoff contenders, there simply aren’t many with glaring needs at shortstop. Among the teams that are currently .500 or better, those in the lower half of the majors in terms of WAR at shortstop are the Rays (who just traded Willy Adames and have Wander Franco waiting in the wings), Cleveland (which traded Francisco Lindor in January), the Mariners (surprise contenders who have J.P. Crawford at the position and don’t seem likely to be buyers), the Mets (who acquired Lindor), the Brewers (who acquired Adames), and the A’s (who rank 30th in shortstop WAR (-0.6) with the disappointing play of Elvis Andrus). They stand out as a possible short-term destination for Story.

Of the .500 or better teams in the 11-15 range in shortstop WAR, the Cardinals’ Paul DeJong is struggling and sidelined by a rib fracture and the Dodgers’ Corey Seager is out with a broken right hand, but both figure to return some time in June. The Royals’ Adalberto Mondesi, who didn’t make his season debut until May 25, played in just seven games before tweaking his left hamstring on Sunday; the prognosis at this writing is unclear. That leaves the Yankees, who are struggling to score runs and hoping that Gleyber Torres (currently hitting .259/.342/.331 for a 96 wRC+) comes around. One might also add the Braves to the mix; they’re 25-26 and have gotten subpar work out of Dansby Swanson.

Barring further injuries — and assuming, of course, that Story himself is healthy — that’s a pretty short list. The Yankees scenario has multiple obstacles, including the lineup’s heavy right-handed tilt and the team’s situation with regards to the Competitive Balance Tax threshold, where they’re apparently about $3.5 million short of the $210 million threshold. The Yankees could sacrifice better prospects in order for the Rockies to absorb a greater share of Story’s $17.5 million salary, but that seems less likely for a short-term rental than for a player over whom they have multiple years of control.

In the short term, the addition of Story to the Yankees’ lineup nonetheless makes some sense given the latest injury of first baseman Luke Voit, who played just 12 games between his return from surgery to repair a torn meniscus and his straining his right oblique. With Story at shortstop, Torres could move back to second base (where his defense is probably a better fit) and DJ LeMahieu could play first, where he’s already started 15 times. For as popular as Rougned Odor might be in the Yankees’ clubhouse, his 94 wRC+ and 0.2 WAR suggest that he’s part of the problem, not the solution. The issue for the Yankees is that the Rockies aren’t likely to trade Story before late July, by which time Voit will presumably have returned. And no, despite all the foaming at the mouth among Twitter’s armchair GMs, they’re not going to trade Torres for Story given that he has three years of club control remaining.

Clarity on the severity of Story’s injury could come soon, but the shape of the trade market will take weeks to fully determine, though it’s fair to classify the Yankees as buyers and the Rockies as sellers. As usual, we await the next turn in this story.

The Time for “Reach Out” Calls Is Here
What’s Eating Francisco Lindor?

Brooklyn-based Jay Jaffe is a senior writer for FanGraphs, the author of The Cooperstown Casebook (Thomas Dunne Books, 2017) and the creator of the JAWS (Jaffe WAR Score) metric for Hall of Fame analysis. He founded the Futility Infielder website (2001), was a columnist for Baseball Prospectus (2005-2012) and a contributing writer for Sports Illustrated (2012-2018). He has been a recurring guest on MLB Network and a member of the BBWAA since 2011. Follow him on Twitter @jay_jaffe.