After a tough loss in extra innings on Friday night, the Dodgers got revenge on their division rival on Saturday night winning game two of the series 8-4. The game was dominated by the LA offense. It was just beautiful.

Freeman, Have Yourself a Day

Freddie Freeman led the way for the Dodgers with a 4-for-5 night, improving his batting average to a major-league-best .330, overtaking Paul Goldschmidt of the St. Louis Cardinals. Freddie’s .927 OPS is fourth-best in baseball.

Moreover, the first baseman’s big night put him alongside some intriguing names in recent Dodger lore.

Freddie Freeman has 5 games this season with at least 4 hits. It’s tied with Howie Kendrick (2016) for the most 4-hit games by a Dodger this century.

Freeman started the fun with a single in the top of the third allowing Trea Turner to score the first run of the game. Turner then went on to hit a 3-run RBI double in the top of the fifth to really break the game open. The All-Star shortstop is ranked fourth in the National League in hitting with a .305 AVG and has collected 94 RBI, the also fourth best this season.

Following the hit, the crowd in Petco Park went crazy…you would think it was the Dodgers hosting the Padres not the other way around.

They need to allow the Dodgers to wear their home whites when they take over an opposing team’s stadium like this. Dodgers fans are unmatched
https://t.co/cfWpzFIVeR 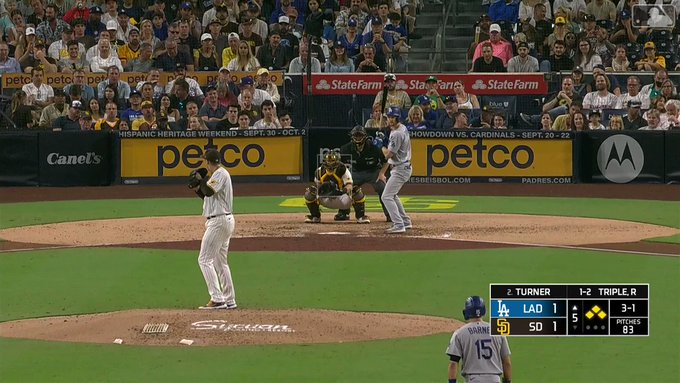 Immediately following, Freeman brought Turner home with a double to left field. Not only does the All-Star infielder lead the league with 178 hits, but he’s also tops in MLB with 45 doubles this season.

But the magic didn’t stop there for Freddie.

Flashforward to his next at bat in the top of the seventh. The 32-year-old hits a two-run shot to the left centerfield giving the Dodgers an 8-2 advantage over San Diego. Watch his 19th homer of the season here: 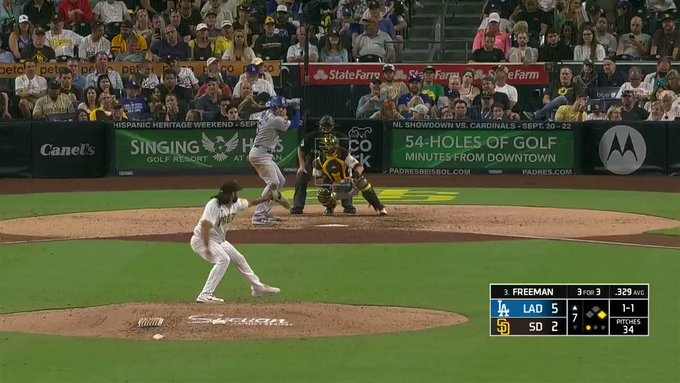 Here’s what he had to say about his stellar performance Saturday night: 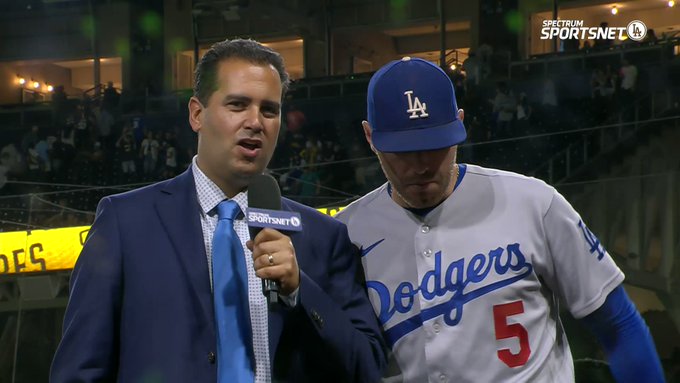 Another W for El Culichi

With 11 hits against the Padres, the Dodgers bats were alive but the win wouldn’t have been possible if it weren’t for their defense, more specifically the man on the mound.

Julio Urias also had himself a night also holding the San Diego offense to only 2 runs in 7 innings. Notably, both were home runs by Manny Machado who attempted but failed to break the game open for the Padres.

El Culichi gave up 5 hits and 2 errors but struck out 5 to contribute to the team’s win while picking up his 16th win of the season. He now has a 2.30 ERA this season, tops amongst qualified hurlers in the NL.

Dave Roberts on Julio Urías: “He was outstanding. I have a hard time coming up with adjectives to describe him and what he’s done for us.”

With Saturday night’s win, the team improves to a 95-43 overall record with a .688 winning percentage and were able to get the magic number down to just 4. The Dodgers look to take the series against the Padres Sunday afternoon.