The Giants hit five home runs to account for all of their runs as they defeated the Dodgers, 7-4, on Monday night. San Francisco postpones the inevitable for at least one more day, as their magic number to be officially eliminated from NL West contention remains at two.

Andrew Heaney had his worst start of the season, allowing six earned runs on four homers in 5.1 innings.

Freddie Freeman and Austin Barnes both homered for the Dodgers in a losing cause. 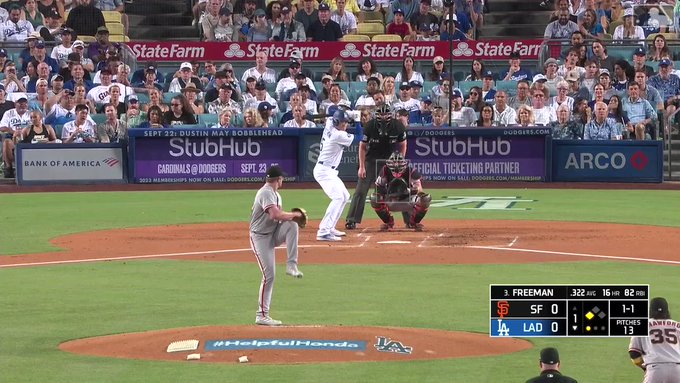 After the Dodgers jumped out to a 2-0 lead on a Freeman home run in the first inning, Heaney’s issues with the longball reared their ugly head. In the top of the third inning, Lewis Brinson, who nearly homered in the first inning on a long foul ball, hit a two-run homer 429 feet to dead center. Two batters later, JD Davis hit a 412-foot homer of his own to give the Giants a 3-2 lead.

In the top of the fourth, Thairo Estrada led off with his 12th homer of the year, and three batters later, David Villar hit the second home run of his career to give the Giants a 6-2 lead.

Heaney ended up allowing six runs, all earned, in 5.1 innings pitched. His ERA on the season is up to 2.94, and he has allowed 10 home runs in his last four starts.

In the bottom of the fourth inning, Joey Gallo ripped a one-out double to drive in a run and put runners on second and third, giving the Dodgers a real chance to cut into San Francisco’s lead.

Unfortunately, Miguel Vargas hit a shallow fly out to right field, and Cody Bellinger struck out looking to end the threat.

In the fifth inning, Barnes led off with a single, and Mookie Betts followed with a double to left. For some reason, Dino Ebel sent Barnes to home on the play, and he was thrown out by 15 feet at the plate for the first out. Betts ended up stranded on third, foiling another chance to cut into the Giants’ lead.

Barnes can’t do everything

Barnes hit a solo home run with two outs in the bottom of the seventh to pull the Dodgers within two, but three Giants pitchers combined to retire seven of the final eight Dodgers hitters.

The homer was Barnes’ third in his last seven games and seventh overall this season. With the single and homer tonight, the backup catcher’s batting average is up to .214 and his OPS is up to .727.

The Dodgers and Giants continue their series on Tuesday night at 7:10, with Tyler Anderson going for Los Angeles and San Francisco leaning towards a bullpen game.