Although it took 8 pitchers, the Dodgers still got the job done on Sunday night collecting their 92nd win of the season. The 9-4 win was even more sweet than usual as they outright won the series with the Padres and turned their magic number from 12 to 9.

Highlighting the game was Trayce Thompson’s late inning magic as he hit a 3 run bomb to left field for a distance of 424 feet. This homer wasn’t just any homer though.

The Padres gave up on Trayce Thompson earlier this season only to see him hit a dagger home run against them for the Dodgers.
Reminder that ANY team could have had Trayce Thompson and the Dodgers got him for cash considerations and he’s thriving.
https://t.co/GTtY5CjlX7 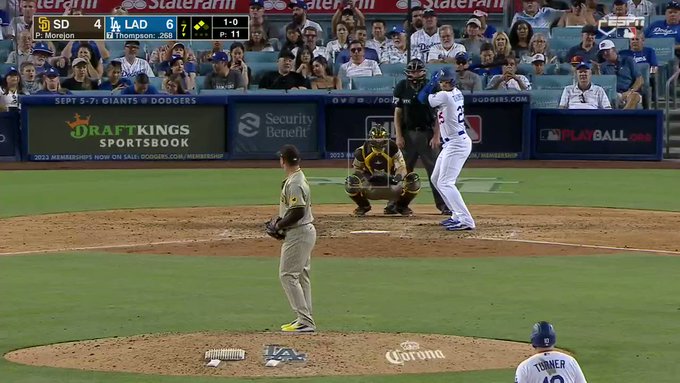 The outfielder has struggled to find a home traveling around 7 teams in just the past 6 years. But after years of trial and error it was the Dodgers that were able to bring out the best in him.

Prior to the late inning homer, Will Smith hit a solo shot in the fourth inning to take the lead over the Padres in the fourth. It was the catcher’s 21st this season and 69th career homer.

Five of Will Smith’s last seven homers have either tied the score or given the Dodgers a lead. His one here in the fourth inning ties the score 1-1.

Trea Turner also highlighted the Dodgers’ offense collecting two RBI including a very crucial double that scored both Chris Taylor and Cody Bellinger to take a 5-1 lead in the fourth. He also did a thing, again.

Trea Turner’s two-run double in the fourth inning gave him 90 RBI for the season. He is now one of three Dodger shortstops with at least 90 RBI in a season joining Glenn Wright in 1930 (126 RBI) and Tommy Corcoran in 1894 (92).

On the defensive end, Ferguson opened the game up in smooth fashion striking out all three batters faced before Pepiot took over in the second. This was the LA prospect’s 8th major league appearance and he struggled on the mound through his two innings:

Pepiot needed 35 pitches to get through the third inning. Just has not been nearly efficient enough – likely part of why the Dodgers used an opener in front of him today. https://t.co/p1zzFDsbAj

However, the 25 year old managed to just allow one run on 3 hits across his 74 pitches total and got 2 K’s in the process. Vesia (who was credited with the win. his fourth of the season) and Martin each threw a hitless inning then Hembree entered and gave up 2 runs on 2 hits and 2 errors. Evan Phillips followed giving up a run, 2 hits, and an error in his 53rd appearance this season.

Bickford and Kimbrel (finally) secured scoreless innings to finish the game out strong. Kimbrel’s ERA finally dropped below 4 after his 1-2-3 ninth inning. It now stands at 3.97, the lowest its been since July 24th.

LA improves to a 92-41 overall record and a 19 game game advantage over San Diego in the NL West standings. The Dodgers will face off against San Francisco in their 3 game series at home before facing off against the Padres once again.

NEXT: Gavin Lux to Remain Out of Lineup Longer Than Originally Expected

Which Carolinas/Georgia Assistants Would We Hire? • D1Baseball

Which Carolinas/Georgia Assistants Would We Hire? • D1Baseball

Five prospects invited to spring training by the Cincinnati Reds