Welcome to your weekly edition of your Razzball fantasy baseball injury report, friends. There is only about one month of regular season baseball left, and quite frankly, this is no time for shenanigans if you want to move up the ranks in your leagues.

You know who does have time for shenanigans? Aroldis Chapman who recently got some fresh ink on his leg, wound up with an infection, and is now on the IL during playoff contention. While the Yankees are probably going to be just fine without Chapman, an infected tattoo is definitely one of the dumbest things I have written about across the course of this season. What I need to know at this point is what this tattoo looks like (once it is healed because I want to avoid a tummy ache). 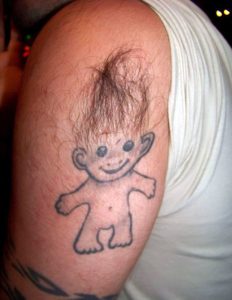 Aroldis Chapman’s tattoo could look like this. Who is to say it does not?

Folks, let’s dive into the sad, nasty, silly injuries that may or may not be plaguing your teams this week.

Yoán Moncada (3B): Frequently injured fellow Moncada is out until at least September 5 with a strained hamstring.  Leury García, who recently returned from the IL, and Josh Harrison have most recently been covering 3B in Moncada’s absence. Moncada has had a poor season with a performance of .197/.269/.313 so far.

The White Sox have a host of other players that are considered DTD including Luis Robert and Eloy Jiménez. Tim Anderson is also still on the IL. Yasmani Grandal recently returned from the IL but was not great, Bob, before his stint on the IL. Even Manager Tony La Russa cannot catch a break (er…caught too big of a break?) as he is on an indefinite hiatus from the White Sox with health issues.

If you have Moncada in your league, you pick up a utility player like Josh Rojas or Luis Urías. Luis Rengifo is also kind of hot right now.

LUIS RENGIFO HOMERED OFF THE GUY HE WAS ALMOST TRADED FOR pic.twitter.com/CsEA3jwUyq

Aroldis Chapman (RP): Chapman is out with an infection on his leg from a tattoo. I am not going to spend time talking about alternatives because if you still have him on your roster, why? Anyway, that noted domestic abuser might be able to return around September 8.

Shane McClanahan (SP): McClanahan has had an awesome season, but he fell victim to left shoulder impingement. He is eligible to return around September 12, but his timeline to return is still uncertain. McClanahan is in the running for the AL Cy Young and has a 2.20 ERA through 24 starts. If you need to pick up a pitcher, Martin Perez or Drew Rasmussen might be worth checking out. RHP Calvin Faucher was recalled for the Rays.

Shane McClanahan was scratched from his start for the Rays tonight. And one can only hope this video from the bullpen before the game is not as bad as it looks. @TriciaWhitaker is reporting he’s out with a left shoulder impingement. pic.twitter.com/Z5HMrHTHCk

Brandon Lowe (2B): Lowe was HBP and remained in the game but was eventually replaced. He will be out until at least September 7 with a triceps contusion. Isaac Paredes and Yu Chang could potentially replace Lowe. Vidal Brujan was recalled as well.

Ryan Thompson (RP): Thompson is out with triceps inflammation. He is eligible to return around September 11. Thompson has had a rocky season with flashes of greatness mixed with flashes of not-so-great-ness. LHP Ryan Yarbrough was recalled to replace Thompson, but you may want to consider looking at someone else. JKJ has discussed some great options like Rafael Montero in SAGNOF: Jorge Lopez Who?.

Dany Jiménez (RP): Jiménez is out for the 2022 season because of a strained shoulder. Zach Jackson and A.J. Puk were serving as a closing committee for Jiménez, but….

Zach Jackson (RP): ….Zach Jackson has also been injured. He will be out until at least around September 11 with shoulder inflammation. The A’s recalled Norge Ruiz, and friends, I must tell you that it is not going well. Ruiz gave up four runs in 10th inning of the A’s–Nationals game on Thursday. The A’s had just taken the lead in the top half of the inning. Peace be with you, Norge.

Dylan Moore (INF/OF): Moore sustained a mild-to-moderate strained oblique. He should be back sometime in mid-September if there are no major setbacks in his recovery. Abraham Toro was recalled to replace Moore. You may remember Toro when he went on a little hot streak earlier this summer before taking a tumble back to the minors. Toro is getting hot again after hitting 5 for 10 in his last three games and coming through in high-pressure situations.

Abraham Toro on breaking through in big, late-innings situations:

“I just like those moments. Just those tight situations, you just want to drive that run in, simplify your approach, and I think I just like delivering for the team.” pic.twitter.com/og5zfM7q1t

Josh Sborz (RP): Sborz was transferred to the 60-day IL and will be out for the rest of 2022 because of a right elbow sprain. The Rangers recalled Jesús Tinoco to replace Sborz.

Patrick Wisdom (INF/OF): P. Wiz has been a steady rock for me this season. As the Cubs’ Home Run King (22 HRs), which is not saying too much, Wisdom was hitting .217/.311/.438 when he went to the IL with a sprained left ring finger. He is eligible to return around September 5. I would hold onto him if you are able. The utility trifecta of Josh Rojas, Luis Urías, and Luis Rengifo, who I mentioned as earlier in this article as Moncada replacements, could be potential replacements for Wisdom while he is down and out.

Mike Moustakas (3B): Moustakas, like Moncada, has been a frequent visitor to the IL this season (SIX visits to the IL). Maybe Moncada and Moustakas had their little hospital beds posted up next to each other. Maybe they fought over the tv remote. Regardless, Moustakas will be out for the rest of the season with a strained calf. This is potentially Donovan Solano’s time to shine. Infield prospect Spencer Steer was selected to take Moustakas’ spot on the roster.

Sources: Spencer Steer was told Wednesday that he’s headed to the big leagues. Steer, acquired in the Tyler Mahle trade from the Twins, has 27 hits and 3 homers & 7 doubles in 23 games since joining AAA Louisville.

Jonathan Davis (OF): Davis has been a freak on a leash a little too often and has been left with an elbow effusion. He is going to be on the IL until around September 6. If you need a replacement, check out Coolwhip’s latest article Top 100 Outfielders For 2022 Fantasy Baseball: For The Children Edition. It is quite comprehensive and will help you find some hidden gems (if you can trust Coolwhip; the jury is still out). Garrett Mitchell was recalled to the roster for the Brewers.

Jackson Stephens (RP): Stephens sustained a nasty concussion after being hit by a line drive from Brendan Donovan. Luckily, Stephens had no fractures or other injuries. He is eligible to return September 3.

Scary moment: Jackson Stephens gets hit by a line drive off his forehead.

He leaves the game and walks off the field with the trainer. pic.twitter.com/azAiaewNDV

Brett Baty (3B): Baty is now doubtful for the season with a torn thumb ligament, which sounds like the paper cut of ligament injuries- small, painful, and debilitating. Terrance Gore was recalled to replace Baty, and he is doing his thang: pinch running, stealing bases, and being speedy.

Terrance Gore steals a bag in his first appearance as a Met! pic.twitter.com/ctgYQQO4Nj

Cade Cavalli (SP): Cavalli is out with shoulder inflammation. He is eligible to return September 12, but the true timeline for recovery is not certain. If you have Cavalli, I would not try to keep him at this point in the season. This is another place I would suggest seeing if Drew Rasmussen is available for your roster.

He has been fortunate, but loving it. pic.twitter.com/PU7AJQxcAE

Lucas Gilbreath (RP): Gilbreath will be out until around September 11 with a strained left flexor tendon. Alex Colomé was recalled to replace Gilbreath on the roster.

Brusdar Graterol (RP): The Dodgers bullpen takes another hit this season as Graterol is out with elbow inflammation. He is eligible to return September 13. Phil Bickford, who has a 5.04 ERA in 51 games this season, was recalled to replace Graterol.

Brusdar Graterol said he’s getting an MRI tomorrow. Didn’t want to speculate on whether he feels he can be back this year until after that. Said he felt some more pain in his elbow today after trying to throw a bullpen session yesterday. Has bothered him since his last outing.

Tony Gonsolin (SP): Gonsolin has been moved to the IL with a strained forearm, which are two scary words at this point in the season for owners and Dodgers fans. Luckily, Clayton Kershaw is on the mend and  September 10. Michael Grove was recalled to replace Gonsolin. Grove has played in three MLB games and has a 4.82 ERA and 7 strikeouts in 9.1 IP.

Tony Gonsolin forearm soreness has not responded as well as #Dodgers hoped. Still shut down from throwing. Will also get an MRI in LA Friday, per Dave Roberts

Joey Bart (C): Bart is in concussion protocol after a foul ball hit his mask. Andrew Knapp will serve as the catcher for the Giants with the possibility that Yermín Mercedes, who was recently optioned, could be the backup catcher. Bart is eligible to return around September 6.

Have a great weekend, folks!

Hopefully, your week was light on injury (in fantasy baseball and in real life), but I would love to hear more about it in the comments or over on Twitter (@keelin_12ft).

Dodgers: Austin Barnes” Value Goes Far Beyond His Play on the Field