The Dodgers rode yet another offensive outburst to an easy win on Wednesday, beating the Brewers 12-6 to run their record to 86-37.

Andrew Heaney threw six very good innings, and the Dodgers offense made those innings free of stress by scoring nine runs in the first four innings. A pair of four-run innings, in the first and fourth, made the game an early laugher.

The Dodgers had 13 hits, including seven doubles and a homer, along with six walks. Mookie Betts and Max Muncy were the only starters not to get a hit, and Mookie walked and scored in the first inning while Muncy had two sacrifice flies. Every starter either scored or drove in a run.

With the Padres’ loss to Cleveland in San Diego earlier in the day, the Dodgers now hold a 19.5-game lead in the NL West and their magic number is down to 19. 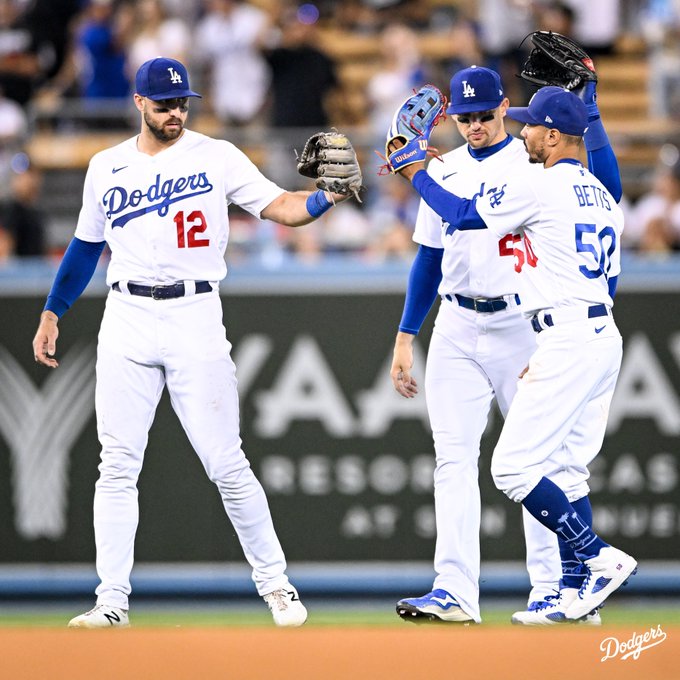 Adrian Houser was making his return from the injured list for the Brewers, having missed nearly two months with elbow/forearm issues. Houser was on a pitch limit of around 80, so Milwaukee manager Craig counsell knew he’d be using the bullpen pretty heavily.

But if you gave Counsell a truth serum, he’d probably admit he hoped to get more than 2.1 innings from Houser’s 81 pitches. Houser walked four and allowed five hits and five runs before departing the game with one out in the third inning. That left a lot of game to be covered by the Brewers bullpen, which was already worked hard after Corbin Burnes lasted just 3.2 innings on Tuesday.

Heaney bounces back in a big way

Six days ago, the Brewers hit three home runs and scored five runs on Heaney, knocking him out of the game with two outs in the fifth inning. Heaney got his revenge on Wednesday night, allowing just two runs in six innings on 91 pitches. Heaney allowed four hits and one walk, striking out ten Brewers (again).

It looked like it might be more of the same in the first inning, when Christian Yelich flied out to deep center leading off and Willy Adames followed with an opposite-field home run. But Heaney settled down and settled in, allowing just one run the rest of the way.

“Feeling better, trying to get deeper in the games and be a bit more pitch efficient.” Andrew Heaney on his outing against Milwaukee. (6 IP, 2 ER, 1 BB, 10 Ks) https://t.co/KhLzm7OvtD 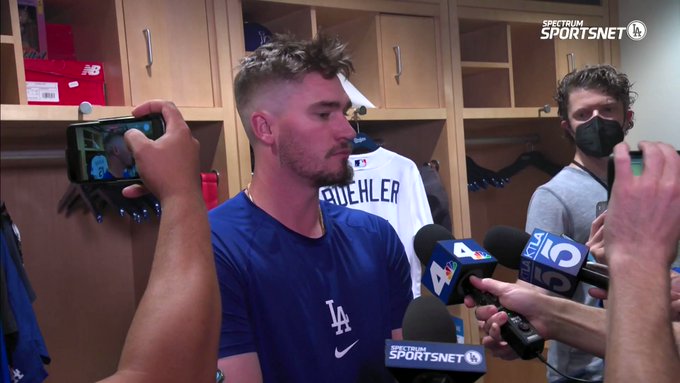 Trea has forgotten how to get out

After going 3-for-5 on Tuesday night, Trea Turner followed that up by going 2-for-2 with three walks, reaching base all five times and scoring three runs.

Turner’s batting average is up to .311, and his on-base percentage is up to .354. His .847 OPS is easily the best in baseball among shortstops.

Chris Taylor went 1-for-5 with a double and a run scored, but perhaps the most promising part of the game for him was that he didn’t strike out.

Barnes gets in on the scoring party

Austin Barnes, batting ninth in the lineup, batted three times in the first four innings, a sign that things were going well for the offense. He didn’t get his fourth plate appearance until the bottom of the sixth, but he made it count by knocking a 92-MPH Jason Alexander sinker into the Home Run Seats beyond the left field wall. Barnes ended up 2-for-4 with four RBIs. 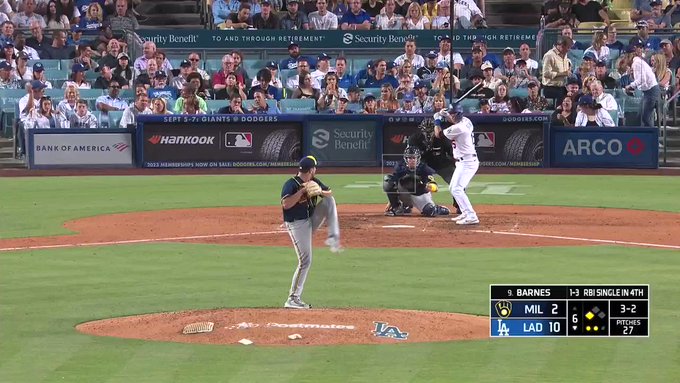 It could have been even better. With two outs in the first inning and runners on second and third, Barnes hit what looked like an RBI infield single, but he appeared to spin his wheels a little bit getting out of the batter’s box and third baseman Luis Urias was able to throw him out to end the inning.

Hanser Alberto pitched the ninth inning for the second night in a row, his sixth pitching appearance this season. All six appearances have come in wins, extending his major-league record over Russell Martin, who position-player-pitched in three games the 2019 Dodgers won.

Alberto retired the first two batters of the inning before hitting Keston Hiura with a pitch and allowing a two-run homer to Hunter Renfroe. His season ERA has ballooned to 4.50.

The Dodgers have an off day on Thursday before starting a four-game series in Miami on Friday.

JAWS and the 2023 Hall of Fame Ballot: Andre Ethier

What happens with the Reds if Bally Sports Ohio folds?