Astros catcher Martín Maldonado appeared in his 90th game of the season on Sunday. That marked a notable milestone for the veteran backstop, as he reached the vesting threshold in his contract in the process. Maldonado is now officially under contract for 2023. While reports had initially pegged the option value at $5MM, Chandler Rome of the Houston Chronicle wrote over the weekend that Maldonado’s salary will actually check in at $4.5MM.

Maldonado, who turned 36 last week, will return to Houston for a sixth straight year. Acquired from the division-rival Angels for Patrick Sandoval at the 2018 trade deadline, Maldonado finished out the season in Houston. He signed with the Royals the ensuing offseason and was traded to the Cubs. Houston reacquired him from Chicago a couple weeks later, and he’s remained an Astro since then on a series of contract extensions.

The most recent of those pacts came last April, when Houston signed the MVP Sports Group client to a $5MM guarantee for the 2022 season with the ’23 vesting provision. Manager Dusty Baker penciled him into the lineup on 118 occasions last season, and he’s gotten the nod 88 times so far this year (with a few appearances off the bench tipping him above the vesting threshold). Maldonado has continued to assume the lion’s share of the playing time even after the Astros acquired Christian Vázquez from the Red Sox at this summer’s trade deadline. Maldonado has gotten 13 starts since that trade while Vázquez has been behind the dish on eight occasions. 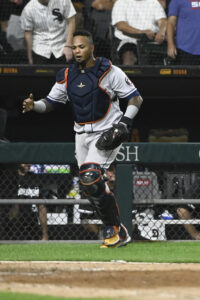 Baker’s commitment to Maldonado as the starting backstop reflects the organization’s belief he’s an integral member of the run prevention unit. The righty has never been an effective hitter, and he owns just a .181/.245/.351 line across 305 plate appearances this season. Vázquez has a far more productive .288/.330/.423 showing at the dish, but the Astros have long maintained that Maldonado’s impact behind the plate far outweighs his underwhelming showing at it.

In prior years, that’s been supported by public defensive metrics. Maldonado routinely rated as a upper echelon pitch framer and received strong overall marks from Defensive Runs Saved throughout the prime of his career. That hasn’t been the case of late, as he’s rated as an average to slightly below-average framer through the past four seasons. He’s thrown out a solid but not spectacular 28.2% of attempted base-stealers this season (11 of 39), and his overall defensive statistics come out right around league average.

There’s no established way to quantify a catcher’s ability to manage a pitching staff or call a game, however. The Astros have long argued Maldonado is elite in those intangible aspects, and their continued commitment both to keeping him on the roster and in the regular lineup reflects that conviction. With Vázquez headed for free agency at the end of the season and a strong candidate for a multi-year deal and a starting job elsewhere, it seems likely Maldonado will again be Houston’s primary backstop in 2023.

The Astros have gotten a limited look at well-regarded prospect Korey Lee this season. The former first-rounder may be the organization’s catcher of the future, but he’s stumbled to a .217/.285/.417 line over 78 games with Triple-A Sugar Land. The only other backstop on the 40-man roster, Jason Castro, is out for the season and headed for free agency. Houston seems likely to look to the waiver wire or lower tiers of free agency for catching help this winter, although any target will probably be a veteran complement to Maldonado rather than someone who’ll bump him out of the primary lineup.