Dodgers News: Freddie Freeman’s Favorite Player Is Probably Yours Too

Freddie Freeman and his family surprise students at Solano Ave. Elementary during the Dodgers Love LA Community Tour. Freeman talked to the kids about the importance of using sunscreen. https://t.co/e1QEzEerRs

As part of the Dodgers Love LA Community Tour presented by @BankofAmerica, Freddie and his family stopped by Garfield High School to surprise students and participate in pep-rally games. https://t.co/8YNZ3ExTjf 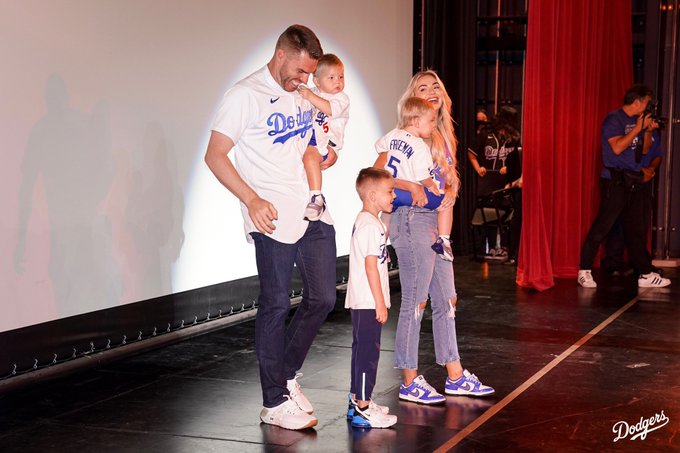 While visiting Solano Elementary, Freeman had exactly the kind of endearing moment with a student that you would expect from Freddie Freeman. A young student told Freeman, “I like Mookie Betts, my favorite player.”

Freeman’s response was perfect: “Mine too.”

Freddie Freeman is talking to some elementary school students about the benefits of sunscreen and skincare. “I like Mookie Betts, my favorite player,” one child says.
“Mine too,” Freddie says. https://t.co/D7i6bpeAXs

It’s been well-documented that Freeman and Betts developed a bond pretty quickly upon becoming teammates. Both Dodgers stars believe they are better ballplayers because of what they’ve learned from each other. And everyone loves Mookie Betts because, after all, what’s not to love?

It also doesn’t hurt that of Freeman’s 74 RBIs this season, 19 of them have driven in Betts. That’s the most Freddie has driven in anyone this year, with Gavin Lux in second with 17 and Freeman driving in himself with home runs 16 times.

A fellow former MVP who spends most of his time getting on base so you can drive him in, and he also happens to be maybe the most likable player in baseball?

Should the Reds pick up J.B. Bukauskas?

Dodgers: Justin Turner Expresses Understanding of Baseball as a Business