Tony Gonsolin had a pretty easy route to his 16th victory of the season on Tuesday, allowing just one run in five innings and departing with a 7-1 lead after just 77 pitches.

But early in the game, before the Dodgers had put a shellacking on reigning Cy Young Award winner Corbin Burnes, Mookie Betts made what felt like a very consequential catch in right field.

With two outs in the top of the second inning, the Brewers had a runner on third base and Luis Urias at the plate. Urias hit a line drive to right field that seemed destined to go off the wall for an RBI, game-tying double. But Mookie had other ideas, getting a great jump and then making a great jump to snag the ball and end the inning. 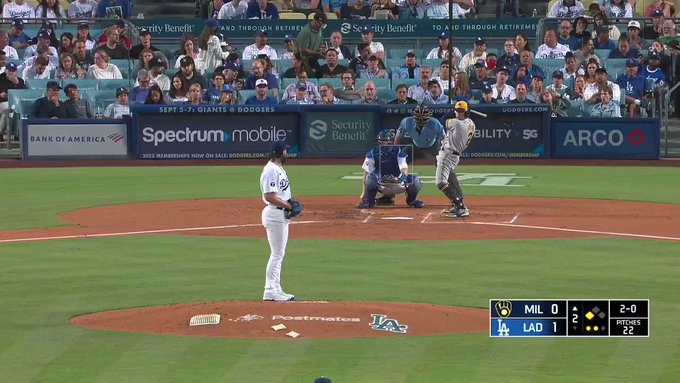 Obviously, Gonsolin was impressed and appreciative; as you can see at the end of the video, he pantomimes Clark Kent opening his shirt to reveal his Superman S on his chest. Gonsolin went on to cruise through the next couple innings before allowing his one and only run in the fifth.

But another Dodger who came away very impressed was the guy with maybe the best view of the play, as Bill Plunkett reports in the Orange County Register: first baseman Freddie Freeman

“That catch – I don’t know if it’s been emphasized how amazing that catch was he made,” Freeman said in appreciation. “First step, perfect route.”

It’s pretty well-documented that Freeman and Betts have absolutely loved being teammates, and this play is another reason why. When you come to a team with an expectation of winning, it means a lot to see your teammates putting in the same effort you are.

It’s not the first great catch Freddie has watched Mookie make, and it won’t be the last, as they’re both under contract for at least the next five years. It’s just one of the little things Betts does that allow him to impact a game in so many ways.

JAWS and the 2023 Hall of Fame Ballot: Andy Pettitte

JAWS and the 2023 Hall of Fame Ballot: Francisco Rodríguez