The Dodgers celebrated Women’s Day at Dodger Stadium on Sunday, and for a fun little treat, they had the wives and girlfriends (“WAGs”) of the Dodgers players choose songs by women to be their guys’ walkup music for the day.

To say the WAGs nailed it would be an understatement.

In honor of Women’s Day at Dodger Stadium, the Dodger players will have different walk-up songs as chosen by their significant others. https://t.co/6S1QqrjXvs 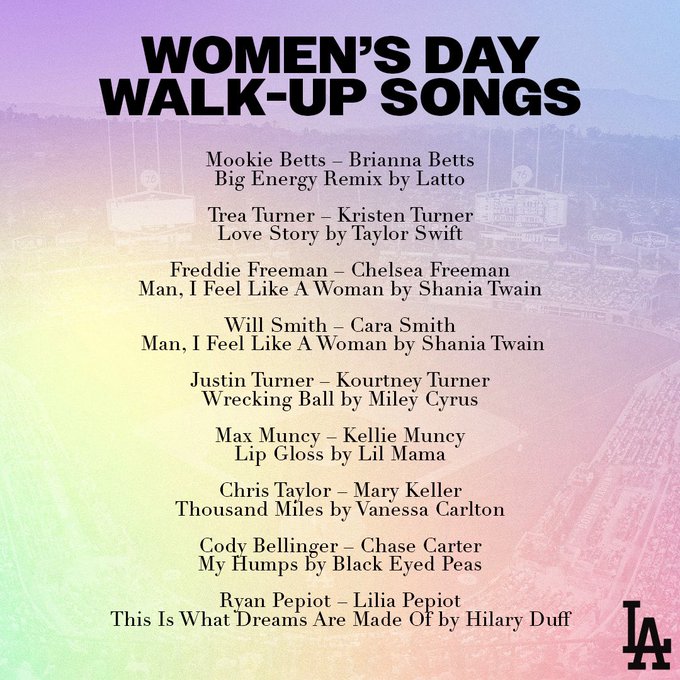 There’s a little bit of everything there. Other than Kristen Turner and Ellen Kershaw both picking Taylor Swift songs and Chelsea Freeman and Cara Smith both choosing the same Shania Twain song, there wasn’t much overlap in the choices. As manager Dave Roberts said after the game, “There’s a little bit more information that I got from these guys and their significant others.”

Some of the songs were simply song the WAGs liked, like Brianna Betts choosing Latto’s “Big Energy Remix.” “That’s her jam,” as Brianna’s husband Mookie explained.

With some other songs, it’s not hard to search for some hidden meaning. Lilia Pepiot chose “This Is What Dreams Are Made Of” by Hilary Duff, an appropriate song for a rookie making his seventh career start on his 25th birthday. We’ve long known that Ellen and Clayton Kershaw are Taylor Swift fans, and “22” is about as perfect a song as you can get for the guy whose number 22 will be retired in Los Angeles in the not-too-distant future.

Technically, it wasn’t just WAGs who chose the songs. Joey Gallo and Hanser Alberto are both single, but they have each other. Alberto chose “Conga” by Gloria Estefan for Joey, and Gallo chose “I’m Real Remix” by Jennifer Lopez and Ja Rule for his buddy Hanser.

One thing everyone agreed on was that the WAG songs seemed to work. In a game against Cy Young frontrunner Sandy Alcantara, they Dodgers scored ten runs, including six in 3.2 innings before Alcantara hit the showers.

As Roberts said to reporters after the game, “We threw out a lot of hits and a lot of runs, so we might have to run that one back.”

And Mookie, talking about Brianna’s “jam,” said, “I think it came out nice. I may keep it.”

The biggest question might be about Craig Kimbrel’s song. Ashley Kimbrel chose Idina Menzel’s “Let It Go” from Frozen, which replaced Kimbrel’s usual “Sweet Child O’ Mine” by Guns N’ Roses. Kimbrel responded by having his first 1-2-3 inning in a while, and while a philosophy or psychology class could spend hours discussing why Ashley chose that song, it’s hard to deny the results.

We’re in favor of Kimbrel continuing to walk out to “Let It Go” as long as it’s working. It could make an outstanding chapter on the 2022 World Series DVD.