The Dodgers announced on Monday that they had agreed to a contract extension with infielder Max Muncy. The extension locks in the $13.5 million team option Los Angeles had held for 2023, and it adds a team option for 2024 worth $10 million with escalators that could push it to $14 million.

Muncy, who had been mired in a season-long slump until breaking out in a huge way this month, was understandably thrilled to be assured of being with the Dodgers for at least one more year. 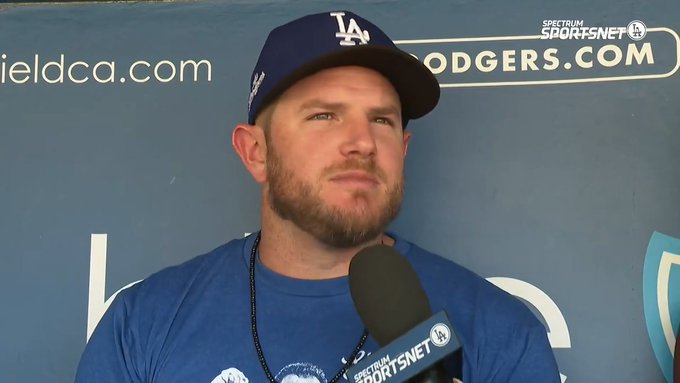 “It means everything to me. There’s no place I’d rather be, and hopefully next year won’t be it, there will be more after that. But just the support I’ve had from the front office and the coaches this year has been, it’s really help me through everything I’ve gone through. So just to come back and know I’m going to have a chance to win, it means everything to me and my family. With where I was before coming to LA, this place has really turned into our family, so it’s nice to be able to stay here for at least another year but hopefully more.”

Muncy was asked if, considering all his struggles the first four months of the season, the contract extension gives him a feeling of peace.

“No. I mean, every day I still have to show up and do the work, I still have to focus on preparing the right way and going out there and doing whatever I can do to help the team win. As long as I can focus on that, at the end of the year I can be happy with wherever I end up. As long as I’m doing things to help the team and doing things the right way and preparing the right way, that’s the most important thing to me.”

Muncy said that while it’s a relief to know he’s coming back to L.A. next year, the contract situation hasn’t weighed on him nearly as much as the on-field performance issues.

“It’s definitely a relief, but I don’t know if it was weighing on me. I think it was just not being a good baseball player that was weighing on me. It was a rough go there, but just trying to understand where I was at, with everyone around me picking me up and reminding me of certain things, things got a little bit easier. And now it’s been a little bit of a relief with some of the results lately, but at the end of the day, the team winning is the most important thing, and if I can get right for October, that’s what I care about.”

Andrew Friedman told reporters that the team initiated the extension conversation before Muncy’s current breakout, and Muncy confirmed that timeline and said it strengthens his feelings of the Dodgers as an organization and as a “family.”

“This is a very close-knit group from up top all the way down to the bottom. The front office, the trainers, the strength staff, the coaches, the players, it’s a very close group, and I don’t know if you see that in too many other organizations. … It really is like a family here. It’s been incredible this year, just seeing the support from the guys. In a way, it makes it that much more, you want to go out there that much more and get right because you feel like you’re letting your family down a little bit. So having the support from them has been everything.”

Muncy talked about the weight that has been lifted through his results this month.

“It’s been a huge relief the past couple weeks. Just seeing some of the results, it just reaffirms the work you’re doing. You can’t get complacent, you still gotta show up every day and make your adjustments and prepare. Right now, that’s what I’m focused on, and hopefully the results keep coming. But at least, with the last couple weeks, I know that I can get back to the player that I am, and just knowing that, I can move forward and be happy, as long as I’m doing things the right way.”

Max admits that there was a bit of doubt that crept into his mind early in the season.

“Maybe a little bit. I mean, I’d be lying if I said there wasn’t. You know, you have a huge injury like that, and you didn’t feel like yourself, so it was a little tough, but again, maybe that’s where the last couple weeks have been huge, just knowing you can be the player that you’ve always been. But at the end of the day, October is what matters, so if I’m making the right moves now to get me ready for October and then have a huge run there, that’s the important thing.”

One interesting thing Muncy noted was that his elbow actually felt a bit worse when he made the swing adjustments that led to his resurgence, so while he’s feeling good, he’s not quite back at full strength.

“I feel pretty close. I’m not gonna say I’m back to 100 percent, but I feel pretty close, everything feels good. The elbow was actually getting a little sore when I started making some of the swing changes, but that’s because it was being used in a way that it hadn’t been used all year, so that was to be expected. But it was kind of a good soreness, because I knew I was using it how I was supposed to use it. It feels pretty good right now.”

It’s clear that Los Angeles is where Muncy wants to be, and with his history with the team, it’s a perfect fit. Here’s to a healthy Muncy and his “huge run” in October.

Dodgers Rumors: LA Set to Sign OF and SS Prospects Out of the Dominican