On Saturday night, Austin Barnes had the opportunity to catch Dustin May in his first major league game since May of 2021.

Barnes, who’s been behind the dish for the likes of Clayton Kershaw, Yu Darvish, Julio Urías, and Walker Buehler, was very impressed by the 24-year-old’s pitching combos. He had this to say after the game, (quote via The Athletic’s Fabian Ardaya):

“The ball’s coming in really hot. It’s moving, going this way and then he’s got some stuff going that way. He’s got a good four-seam that can rise at the top, too. By the time he throws that breaking ball at you, it’s hard to adjust to all those speeds and all those movements.”

The type of pitches he’s throwing for example include:

Dustin May’s first strikeout came on a slider that spun at 3,457 rpm.
For comparison, the highest average spin rate on sliders this year belongs to Oakland’s Sam Moll, at 3,171 rpm – a whole 286 rpm from the neighborhood May’s been at this first inning. 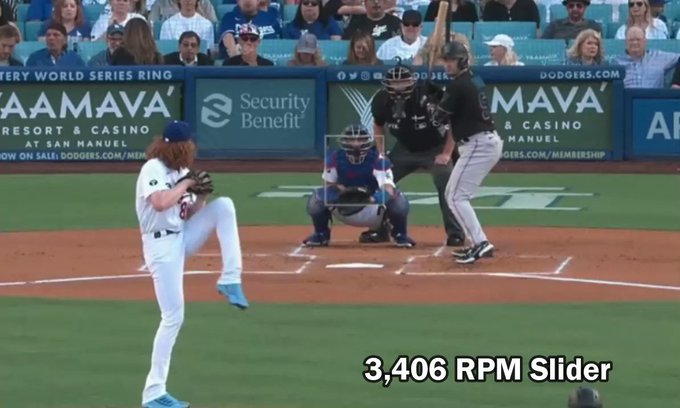 These are just a few stats from his impressive five scoreless innings including 9 strikeouts and allowing only one hit. From what it seems like, Code Red is back in business and picked up right where he left off.

Last season before his injury, May only allowed 16 hits and 4 homers while collecting 35 strikeouts over 23 innings pitched.

Prior to his return to The Show, May was shoving during his minor league rehab stint. The righty was rolling, with 36 strikeouts across 21 innings pitched. He boasted a 1.71 ERA across his 6 game starts and proved he was ready to return to the scene.

In the words of Barnes, “the sky is the limit” with Dustin May and while fans can get excited about what else Code Red can do, other teams should be scared of his nasty yet lethal pitches.