The Dodgers beat the Marlins, 2-1, in a good old-fashioned pitchers duel, with Los Angeles starter Tyler Anderson and Miami starter Jesus Luzardo throwing matching zeroes for six innings before each allowed a run in the seventh.

In the bottom of the eighth, the Dodgers got to old friend Dylan Floro, who spent three years in L.A. and was a key part of the World Series-winning team in 2020. Floro took the loss after allowing one tough-luck run in one inning pitched.

Evan Phillips closed out the game for the Dodgers, throwing an easy 1-2-3 inning with a little help from his center fielder (more on that below).

Anderson has had excellent run support overall this year, with the Dodgers scoring an average of 6.21 runs per game in his starts coming into tonight. But both of his losses have come in 4-0 losses, including his last start on Sunday in Kansas City.

Tonight looked like it might be more of the same for Anderson, who pitched six shutout innings before allowing a two-out run in the seventh to go down 1-0. Anderson missed out on his chance to win his 14th game of the season, but he didn’t have to worry about being tagged with his third loss after Trayce Thompson hit a two-out, game-tying double to score Justin Turner from first base in the bottom of the seventh. 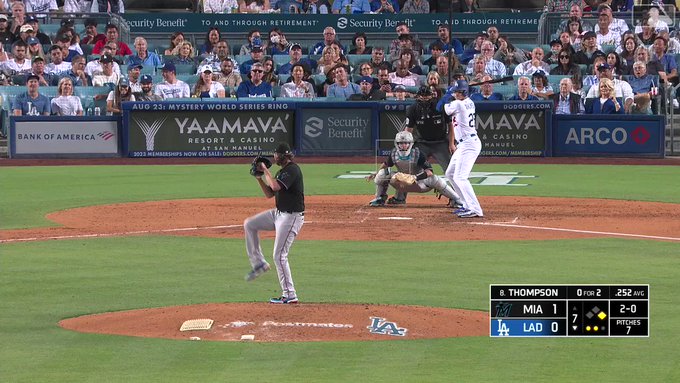 Anderson lowered his ERA to 2.73 and extended his team-leading innings pitched total to 135.1.

Thompson’s RBI double in the seventh came against Steven Okert, against whom opposing hitters were batting just .177 this season.

It was Thompson’s 21st RBI with the Dodgers this season, and his 12th in the seventh inning or later. Thompson is hitting .326 with an OPS well over 1.000 from the seventh inning on. And to add to the late-night heroics, he recorded the first out of the ninth inning with a leaping catch as he collided with the wall in center field. 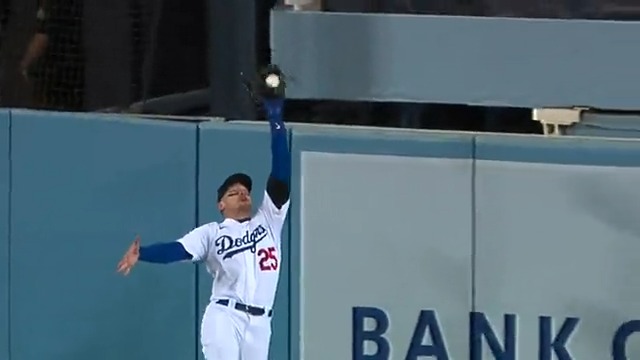 After the Dodgers tied the game, manager Dave Roberts went with Chris Martin to pitch the top of the eighth. It was the highest-leverage situation Martin has been in since joining the Dodgers, in what might have been a test by Roberts to see what he can expect from Martin in tough spots.

If it was a test, Martin passed with flying colors, getting a groundout, a fly out, and a strikeout in a 1-2-3 inning. His fastball sat at 96 and touched 97.

With one out in the bottom of the eighth and the game tied, Will Smith came up with runners on first and third. On a 2-1 count, he hit a hard grounder to third baseman Jon Berti. Mookie Betts broke for home, and Berti looked to throw him out. But Marlins catcher Jacob Stallings thought Berti would be going to second for the double play, and he headed to back up the throw to first base.

In the end, Berti was left holding the ball and everyone was safe, including Betts with the go-ahead (and eventual winning) run.

Phillips over Kimbrel in the ninth

Dodgers closer Craig Kimbrel did not get the save opportunity with a 2-1 lead in the ninth, with Roberts opting instead for Evan Phillips. Roberts had not said before the game that Kimbrel was unavailable, but that could have been a strategic move more than anything.

The end result was something Dodger fans are not accustomed to this season: an easy ninth inning. Phillips attacked the strike zone and got good results. The camera showed Kimbrel watching from the bullpen, but it wasn’t clear whether he had a notepad in his hand.

The Dodgers will send Dustin May to the mound at 6:10 pm Saturday evening in his return from Tommy John surgery. The Marlins will counter with rising young star Braxton Garrett.