With that, we have no more trading allowed in the Razzball Commenter Leagues.  Midnight, this past Saturday was our cutoff and we had a couple deals that snuck in right at the wire including a couple from TT Is The Way who was the busiest trader in all the RCLs.  TT made more trades (13) than most leagues made all season!  That’s quite the feat of rosterbation.  With no more trading, we now have to focus solely on the waiver wire for finding those late-season gems.  Could Vaughn Grissom be a league winner down the stretch?  Maybe Gunnar Henderson gets some run for the O’s and leads teams to victory.  We’ll see, there are about seven weeks to go in this marathon season, still plenty of time to make a charge, just ask Young Guns from RCL #26 who had a very impressive week.  More on that and the rest of the stats for the week that was, week 18, below:

Laura was the big winner this week, clocking 2.5 points and jumping over Cram It, who had the worst week and lost three points.  That swap in the standings was the only movement as the ‘Perts league settles into the final stretch. 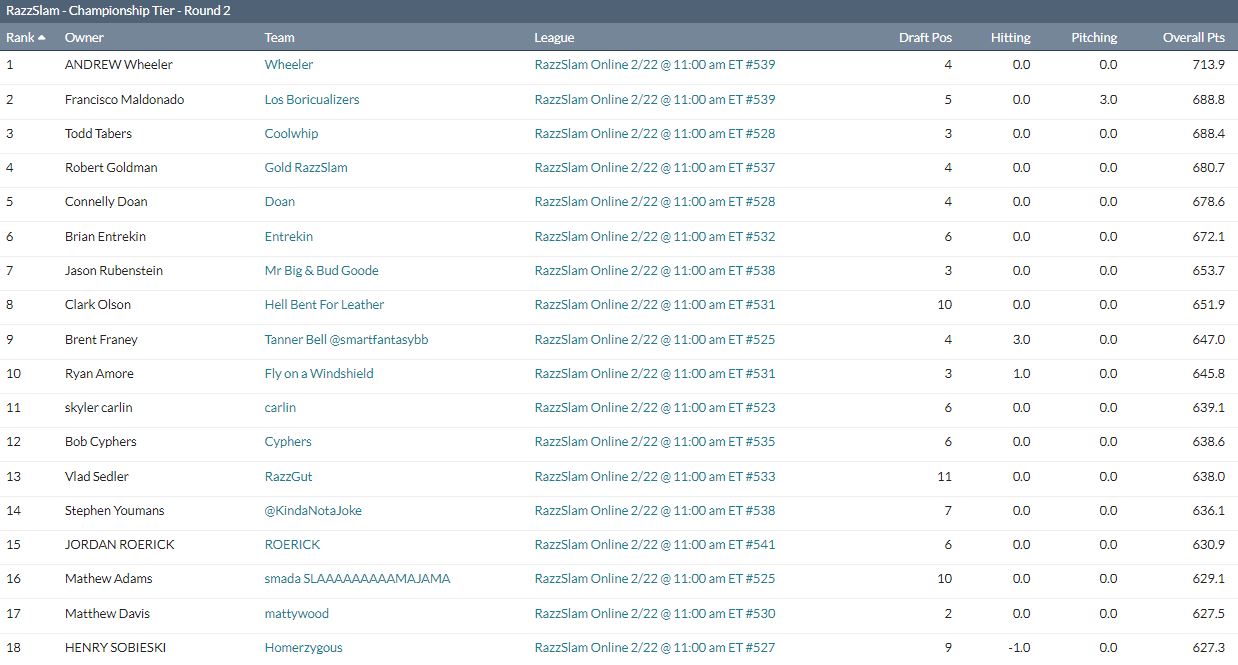 We have reached round 2 of the Cutline, which means…basically there are less teams and if you weren’t in the top 30 your odds just got significantly harder.  It looks like the next cutline is the top 18 in the Championship Tier plus the top two in the WC Tier.  Coolwhip is in a very nice spot, currently sitting in third in the Championship Tier as we head into the first scoring period.  Good luck, Whip!

Wake and I held onto those top two spots for another week.  Fred Garvin MP slipped up a smidge and fell to fifth, allowing my ‘Perts League team and stechsjj to move into third and fourth.

AllRice remains in sixth while Original Schmohawks joins the top ten this week, jumping from 13th to seventh.

My RCL #34 team holds steady in eighth this week while FFB slips a bit to ninth overall.  Asynda Boil also falls one spot this week to round things out in tenth place.

All the trades that have gone down in the past week.  Public ridicule is not only allowed, but encouraged.

Our final trade update was a busy one with 16 trades getting completed.  I had the unfortunate luck of trading for Tim Anderson the day before the news broke about his injury, good times.  Everything else here seems pretty standard, I really like Scherzer and Witt for Ohtani, that seems like the type of deal I had in my head when I would think about what it would take to acquire him.

VinWins did some extra tallies for our final trade numbers:

10 – NIGHT OF THE LIVING ZOMBINOS

No records this week as no one team really separated themselves in any category.  We did get another tie for the wins lead, meaning it’s now six teams tied at 10 wins.  I can’t wait for someone to win 11.  Your Mom also tied the saves lead with 13 this week.

Summary: Young Guns brought out the big guns this week, leading the RCLs in Runs and just off the pace in HRs while adding a killer K/9 and itty bitty ratios.  The big week was good for 8.5 league points and pushed the Guns from fourth to first!  Vinnie Paz went ham, hitting .455 with four dingers and Brady Singer and Blake Snell combined for three wins and 31 strikeouts in 25 IP along with sub-one ratios.  What a week!  Just goes to show there’s still time to make big jumps, nice work Young Guns!

Dodgers News: Dustin May Reacts to His Dominant 2022 MLB Debut