Dodgers Complete Second Series Sweep of the Season Against the Giants

The win continues to push the narrative for the Dodgers to become serious contenders for the World Series, but the big series win comes with what could be a huge issue for the team moving forward.

Clayton Kershaw started on the mound for the Dodgers pitching four innings and giving up just one earned run. The future Hall of Fame pitcher warmed up heading into the fifth inning and appeared to be in pain and exited the game.

Kershaw was diagnosed with a lower back injury and further tests will determine the severity of the injury for the Dodgers pitcher.

All Dodgers Make it on Base

The Dodgers offense did what they do best behind a pair of home runs from their All-Stars Mookie Betts with a 3-run shot in the fourth inning and a solo shot from Trea Turner in the seventh. Gavin Lux secured his 32nd RBI of the season with a single in the second inning to get the Dodgers on the board.

Betts and Giants pitcher Jarlin Garcia got into a small altercation as Garcia strikes out Bellinger and Outman and hits Betts with the Dodgers celebration. Soon after, the umpires came over to the Giants dugout resulting in Giants manager Gabe Kapler not taking the verbal altercation lightly.

Kapler soon got ejected from the game.

Jarlin García gestured toward Mookie Betts in the on-deck circle after a strikeout.
Umpires came over to the Giants dugout and Gabe Kapler got HEATED and ejected 😳 @NBCSGiants https://t.co/K7dHBMmVqG 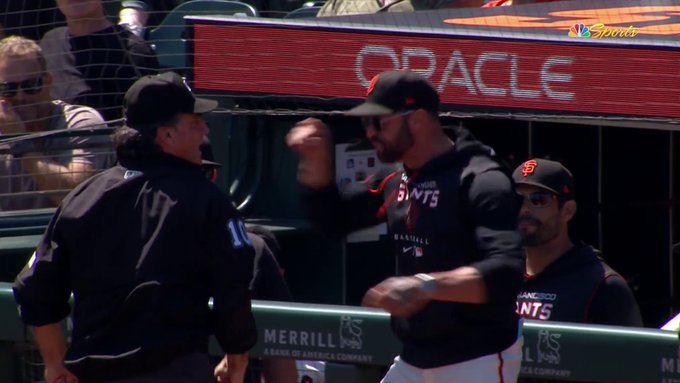 The Dodgers will start the series off against San Diego Padres on Friday at 7:10 PM at Dodger Stadium. Tony Gonsolin draws the start for the Dodgers against the Padres Sean Manaea. The Dodgers will also hold a Vin Scully remembrance ceremony prior to the start of the game.

NEXT: Chris Taylor Could Return This Weekend