The Dodgers and MLB world were dealt a mighty blow on Tuesday night with the passing of Hall of Fame broadcaster Vin Scully. The icon spent 67 years calling games for the Dodgers from Brooklyn to Los Angeles. Now in the wake of his loss, the club is set to honor him for the rest of the season.

Starting today, players can be seen wearing “VIN” patches on their right jersey sleeves. The patch is black and features the same microphone style the organization used when he was enshrined in the ring of honor back in 2017.

Bill Plunkett of the OC Register was the first to show us the new look jerseys.

Plunk also confirmed that the club will have a pregame tribute for the late, great Scully back at Dodger Stadium on Friday. 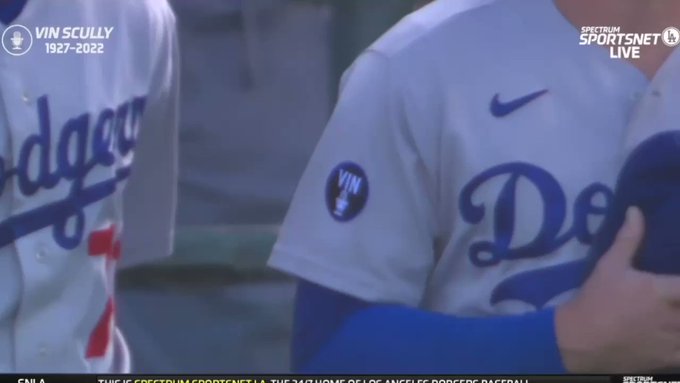 The VIN patch is the latest in too many fallen franchise pillars. Last season, the team wore the numbers 2 and 20 on their sleeves after the passing of Hall of Fame manager, Tommy Lasorda, and Hall of Fame pitcher Don Sutton. Before then, legendary hurler Don Newcombe’s number 36 was on sleeves in 2019.

Hunter Greene to the IL, Reds call up Ryan Hendix