Have yourself a game, James Outman. The Outman show was in full effect in Colorado today. In his MLB debut, the 25-year-old went 3-for-4 with 2 runs, 3 RBI’s and was a triple shy of the cycle. Only Dodgers great – Mike Piazza – had 3 hits in his debut back in 1992.

The last Dodger rookie to have 3+ hits in his first career game was Mike Piazza on 9/1/1992 at Cubs. 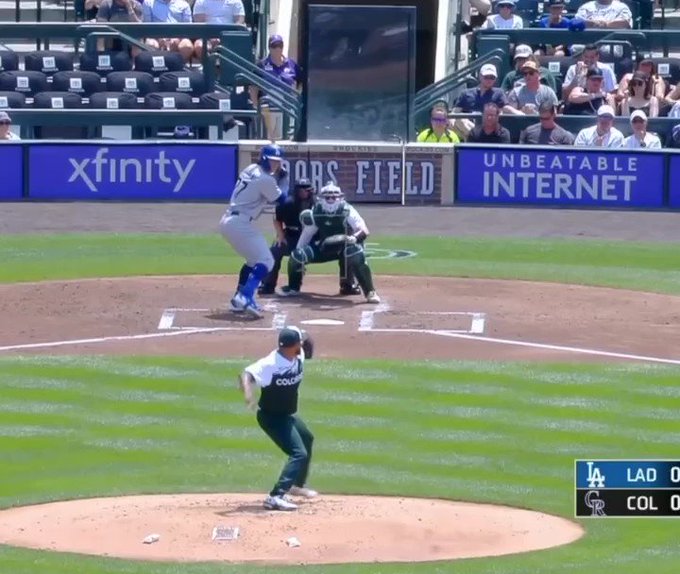 James ended the game in LF. The left-handed batter was clearly the story of the day. Dodgers commentator Joe Davis even joked about a trade proposal on the broadcast saying, “Outman for Soto straight up.” Of course, Nationals would laugh at that offer, but it was funny to hear Joe banter about that trade rumor.

Let’s show some love to the veterans now. Shortstop Trea Turner extended his hitting streak to 18 games with his only hit coming in the first inning with a single, which had him end up on second due to an error by LF Kris Bryant.

First baseman Freddie Freeman continues to stay hot in the second half going 3-for-5 along with a ribbie, improving his AVG to .325. Turner and Freeman are currently one and two in the league in total hits, Turner with 126 hits and Freeman with 125 hits.

Sunday’s starter Tony Gonsolin didn’t have a great outing today in the pitcher’s nightmare known as Coors Field. The Cat Man allowed 5 hits and 3 earned runs with one walk in 92 pitches. But the bullpen held their own and allowed only 3 hits, 0 R’s and 6 K’s.

The Dodgers take 3 out of 4 from Colorado this weekend. The next time the boys in blue will face the Rockies will be in late September in Los Angeles as they will finish off the regular season playing 6 in a row vs their division rival. This is due to the lockout being resolved later than it was which caused a minor scheduling conflict.

Los Angeles earned their 68th win of the season and will be heading to the Bay Area to take on arch-rival San Francisco Giants for a 4-game set. The last time the Dodgers were in SF they were swept in a 3 game series back in June, so they’ll be looking for some payback this week. Southpaw, Andrew Heaney will be on the hill tomorrow night looking to get his 2nd win of the season vs. Giants ace Logan Webb.

Latest On Mike Trout’s Back Injury

Latest On Mike Trout's Back Injury