Dodgers Postgame: Julio Urias and Will Smith Shine in Another LA Win at Coors

The Dodgers have been one of baseball’s best teams this season, and their current 8-game road trip will be a good test as they look to build their lead in the NL West. After a 13-0 blowout to open the series against Colorado, the boys in Blue escaped with a 5-4 victory in what was a very different ballgame Friday night.

In the midst of the best statistical season of his career, Julio Urías delivered for the Dodgers in this game. A rough second inning didn’t stop the young lefty from getting through the seventh, which included a stretch in which he faced just one over the minimum across 4 innings.

After putting up 13 runs in the series opener, it looked like it could be another offensive explosion for the Dodgers after scoring 5 in the first three innings. That would be all they would get, however, as the Rockies bullpen shut them down the rest of the way.

A five-run lead is never safe in Coors Field, but it proved to be just enough this time around. Still, leaving 26 runners on base is not a stat to write home about. The Dodgers will need to work on their situational hitting if they want to play deep into October once again.

One bright spot in the lineup recently, however, has been Trayce Thompson. The newest Dodger has continued to hit the ball hard, and his second-inning home run was no different. 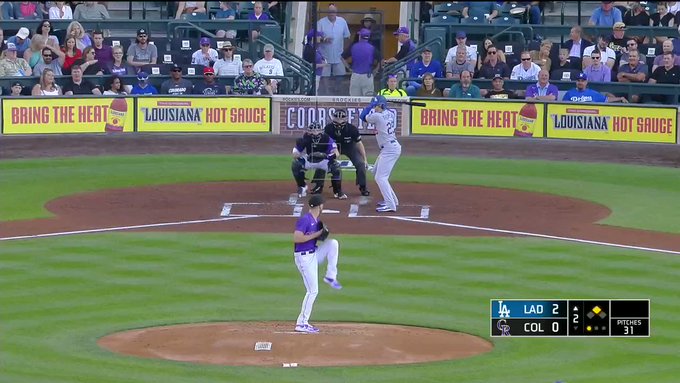 Will Smith Heating Up

While the offense as a whole struggled on Friday night, Will Smith might want to extend his stay in Denver with the way he has performed. After a 1-24 stretch coming out of the All-Star Game, Smith has gone 4-8 with 5 RBI in the first two games in Colorado. This is nothing new for him, however, as he’s delivered at Coors Field throughout his career.

Dodgers closer Craig Kimbrel entered the ninth inning with LA leading 5-2. After inducing a ground out from Charlie Blackmon, four of the next five hitters reached and the Rockies caught the lead down to one. Kimbrel would get out of the jam thanks to a great catch in foul territory by Trace Thompson. It was yet another rocky appearance from Kimbrel this year.

The Dodgers have two more games in Colorado before a rematch with the San Francisco Giants next week. It has been an overly positive start to an 8-game road trip for LA, and they will hope to continue their winning ways as they jockey for the best record in baseball.