The Dodgers have had a good relationship with the University of Louisville after drafting current starting catcher Will Smith back in 2016 and top prospect pitcher Bobby Miller in 2020. This time around, they decided to add one more Cardinal to the roster with 21-year-old catcher, Dalton Rushing as their second round pick (LA did not have a first rounder in 2022) and the 40th pick overall.

Today, the Dodgers were able to lock up their Louisville Slugger as well as what seems to be the rest of their draft picks except 20th round pick, Carter McCalley. 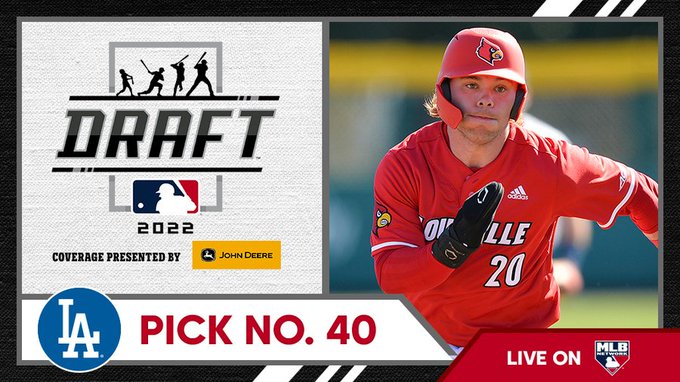 This past year with Louisville, Rushing played in all 64 games, starting in all but one game, finished with a .310 batting average, collected 16 doubles, a team-best 23 home runs, 62 RBIs and 68 runs scored. He also posted a 1.156 OPS in his third and most recent season.

His 23 home runs were tied for the fourth-most in a single season in Louisville history and were the most by a Louisville player since 2009.

The prospective catcher was ranked top 10 in the ACC in walks, hit by pitch, home runs, on-base percentage, runs and slugging percentage, and ranked top 15 in RBIs and total bases.

“Rushing needs more experience and agility as a catcher, though area scouts believe he can become at least an adequate receiver and possibly better than Davis in that regard. He has solid arm strength and makes accurate throws, even from his knees.”

Friedman seems confident in his decision with LA’s new addition as he had with some of LA’s previous draftees. Clayton Kershaw, Will Smith, Walker Buehler, Gavin Lux, and Tony Gonsolin are just a few who were drafted by the Dodgers and developed as successful game changers over the years. Rushing shows potential to keep that legacy alive.

The Good, the Bad, and the Ugly

Dodgers vs Twins: Lineups, Pregame Matchups, and More for August 10

Dodgers: Ryan Pepiot Could be Filling Kershaw’s Spot in Rotation