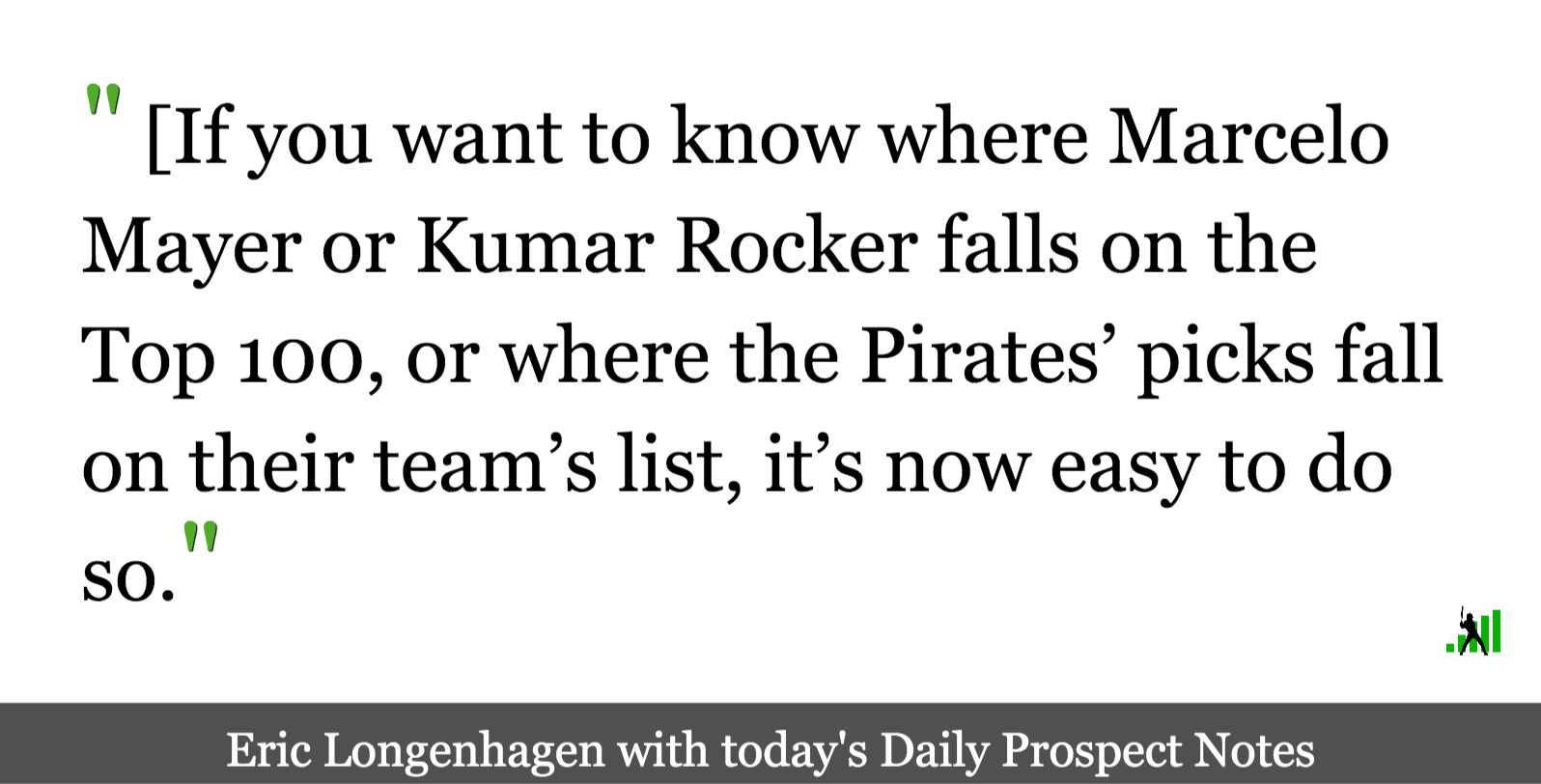 The players selected in the 2021 Draft have now been moved to their teams’ prospect lists on The Board. So if you want to know where Marcelo Mayer or Kumar Rocker falls on the Top 100, or where the Pirates’ picks fall on their team’s list, it’s now easy to do so. More players than were originally ranked on the Draft Board have been added to the pro lists and also now have a presence on the 2021 Draft Board; we ranked about 80 players before the draft, but another 80 or so who were picked felt as though they required immediate inclusion on the pro lists. I assumed anyone picked in the first 11 rounds will sign because, historically, they do. If a player who has been added to the pro side of The Board does not sign, I’ll remove them from the pro side and move them to the appropriate Draft year once the signing deadline passes. At most, that might be a couple of players.

Kevin Goldstein and I also took a “low-hanging fruit” pass at the Top 100 list and I took one, on my own, at most of the team-specific lists. Anyone whose FV on the team lists changed has an “up” or “down” arrow in the trend column. You can filter for those by clicking that column. There are some players within the 50 FV tier whose grades didn’t change but whose ranking did. Jasson Dominguez didn’t look great at Futures Game (he has swing path issues and close to average raw power with zero physical projection) but he’s still a teenage switch-hitter with good power for his age and a chance to stay up the middle. He’s a 50 FV prospect but didn’t look like a fast-rising, transcendent star, so he slid in the rankings though his FV is the same. I’m going to run through why those prospects changed (or were added) now.

Adley Rutschman’s rank didn’t change but he moved from the 65 FV tier to the 70 FV tier on the strength of his Futures Game look. He is not normal. A switch-hitter his size, with his kind of rotational explosion, who has the bat-to-ball feel to switch which side of the cage he’s hitting in mid-batting practice session and just keep hitting bombs is not normal, and this is also an elite defensive catcher and locker room guy. He’s now in the FV tier Shohei Ohtani, Fernando Tatis Jr., Ronald Acuña Jr., and Vladimir Guerrero Jr. were in as prospects.

Futures Game looks also aided Reid Detmers, Quinn Priester, Francisco Álvarez, Brett Baty and Brennen Davis‘ stock. Álvarez had the best BP at the event and has huge power for a catcher. Baty’s BP was also fantastic, but more importantly his infield was, too. Detmers’ has held his velocity spike so far this year and his secondary pitches can all miss bats. Priester has added a nasty low-90s cutter to his mid-90s fastball/elite curveball duo.

Noelvi Marte moved into the 60 FV tier, which Daily Prospect Notes readers will have anticipated.

Three catchers moved on to the top 100: Houston’s Korey Lee, Seattle’s Cal Raleigh, and the Dodgers’ Diego Cartaya. All three are somewhat flawed (Lee needs to lift the ball more, Raleigh and Cartaya need better approaches) but that’s fine at catcher, which is an industry black hole offensively. Rays CF/MIF Greg Jones‘ performance is catching up to his tools, so he slides in close to 75th overall, where lots of our boom/bust types tend to live.

Several Yankees moved. Anthony Volpe entered the top 100, as his exit velos are now close to big league average and he’s hitting the ball in the air with remarkable consistency. Josh Smith and Diego Castillo also moved up. Smith has elite baseball feel and instincts, while Castillo, per a source, has elite-in-zone contact rates and is also hitting the ball in the air consistently. Both are high-probability role players, at least.

Ken Waldichuk, who I’ll hopefully see this weekend in Somerset, is third in the minors in strikeouts. A source told me he has three plus pitches on paper and that, “his fastball has perfect shape and movement.” He may end up in the 50 FV tier close to similar guys like Aaron Ashby, Luis Medina, and Matt Canterino next week even if he does project in relief.

There are a few more players I want to touch on specifically before broadly pointing to performance and severe injury as the reason most of the others moved one way or another. First, Royals first baseman Nick Pratto has had an epic rebound season after a bad 2019; he moves into the 45 FV tier. His swing has changed in a way that lets him catch topside fastballs and lift them. He’s also a first base-only prospect who’s striking out a ton, and I think his swing’s uphill nature means he’ll struggle with stuff that has lateral action in the big leagues. This is to say that I think Pratto for sure is a big league piece of some kind, but I can’t see moving him into the top 100 and think his rise stops here.

Red Sox righty Wilkelman Gonzalez is the talk of the Florida Complex League. I’ve spoken with three scouts who’ve seen him, and while one think he’s a reliever, the others think he might have an argument to be on the top 100 right now. The 19-year-old righty’s scouting report can be viewed by clicking the clipboard here. Were he in the recent draft, I think he’d have been the second teenage arm drafted, somewhere between Jackson Jobe and Andrew Painter.

A few Dodgers notes, as that’s who I’ve spent time watching the last few days in Arizona. Switch-hitting 20-year-old Venezuelan shortstop Carlos Santiago is short to the ball with power and looks quite good on the complex. So does Jose Ramos, who trades places with Luis Rodriguez on the Dodgers list. Ramos had a big Extended and has continued to hit throughout the summer; his hitting hands work great.

We’ll have live updates to the team lists continuing throughout the rest of the summer, which will also be reflected in live changes to the farm system rankings.