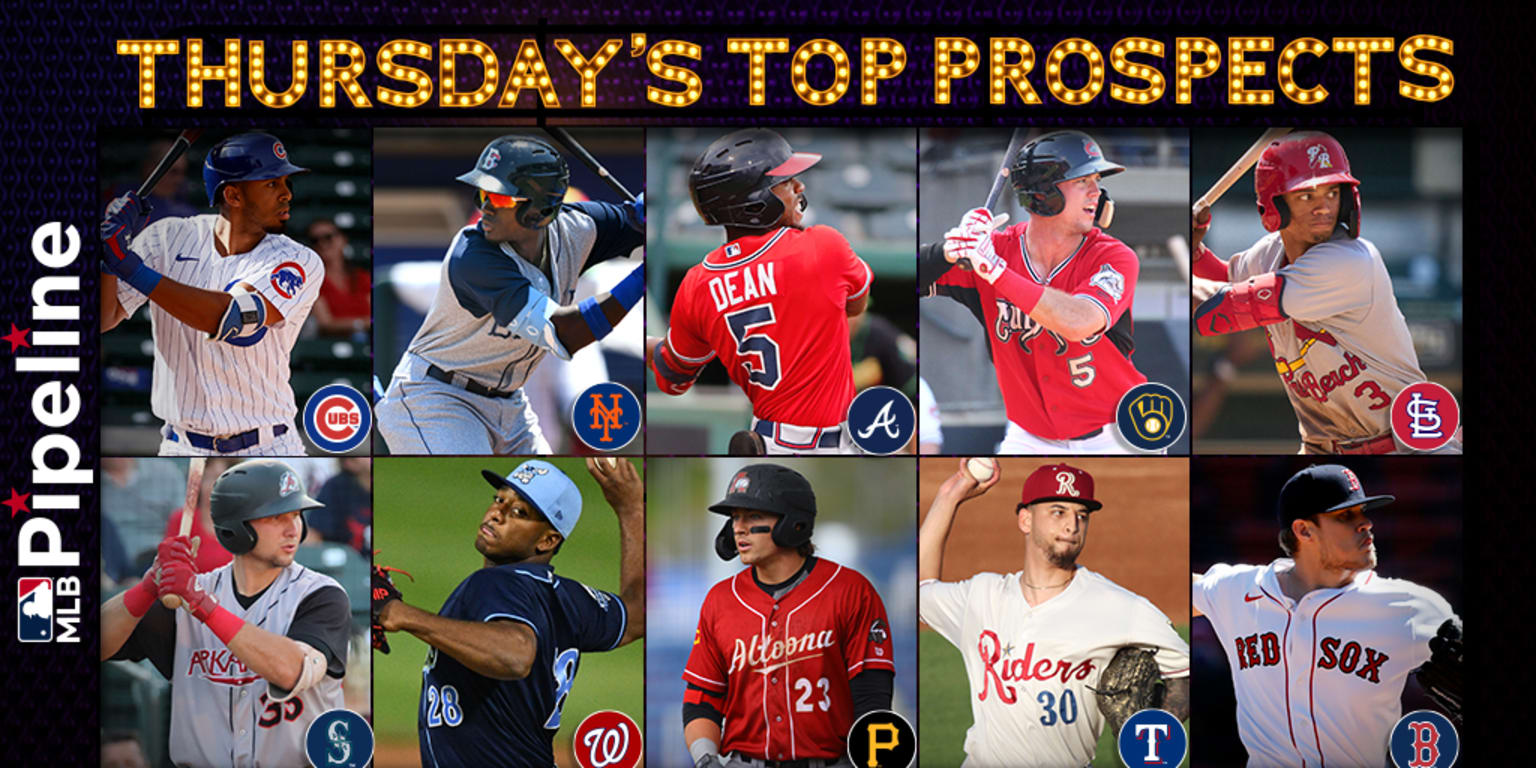 Cubs: Brennen Davis, OF (MLB No. 47), Double-A Tennessee
Davis broke out of a 7-for-40 start to his Double-A career with a homer and a personal-best four hits to pace Tennessee’s offense. The 21-year-old reached safely five times, scored four runs and drove in two in his best all-around performance of the year. Davis’ season began late after he was hit in the head by a pitch during Spring Training, but he hit .321 in eight games with High-A South Bend before his promotion to Tennessee on June 1. Cubs prospects stats »

Mets: Ronny Mauricio, SS (MLB No. 52), High-A Brooklyn
Make that back-to-back three-hit games from Mauricio as the middle infielder went 3-for-4 on Thursday night. Mauricio hit his second triple of the season as part of the performance and is 5-for-8 over the past two games. The 20-year-old got off to a slow start in June, but appears to be picking up the pace of late. Mets prospects stats »

Braves: Justin Dean, CF (No. 25), Double-A Mississippi
Dean was perfect out of the top spot in Mississippi’s order, going 4-for-4 with a quartet of singles, a run scored and an RBI in his team’s win over Birmingham. The four-hit showing was Dean’s second such day in his last four games, having gone 4-for-5 with a double, three RBIs and a run scored on June 13 at Biloxi. The outfielder has been surging in June after posting a sluggish line of .203/.368/.348 in 22 May games. Dean is batting .345/.410/.491 through 15 contests this month and has hits in 11 of them. Braves prospects stats »

Brewers: Tristen Lutz, OF (No. 12), Double-A Biloxi
Mired in a 5-for-51 slump going back to May 29, Lutz tallied a double during a multihit performance Wednesday. He added to that with another strong effort on Thursday. The 22-year-old added three more hits, falling a triple shy of the cycle and driving in three runs to pace Biloxi’s offense. Lutz’s fifth homer — a three-run shot that broke the game open in the sixth inning — was just his second since May 14. The 34th overall pick in the 2017 Draft is batting .221 with 15 extra-base hits and 21 RBIs in 140 at-bats. Brewers prospects stats »

Cardinals: Masyn Winn, SS (No. 5), Low-A Palm Beach
Out of the leadoff spot, Winn put together a career-best day by going 5-for-6 in Palm Beach’s wild 11-10 win over Daytona. The 2020 second-round pick singled three times and added a double and triple, scoring three of his team’s runs and driving in another. Prior to Thursday’s showing, Winn’s previous best day for his first professional season was a four-hit performance on May 12 at Jupiter. The infielder’s five knocks against the Tortugas bumped his average from .234 to .259 and OPS from .708 to .756. Cardinals prospects stats »

Mariners: Cal Raleigh, C (No. 7), Triple-A Tacoma
Raleigh ran his hitting streak up to 23 straight games and wasted no time doing so, singling up the middle in the first inning. The backstop then added his seventh homer of the season — and sixth of the streak — when he belted a two-run shot to right field in the fourth. Over the course of his streak entering play on Thursday, Raleigh had batted .396/.426/.725 dating back to May 15. Thursday’s performance was his 11th multihit game since that date. Mariners prospects stats »

Nationals: Joan Adon, RHP (No. 16), High-A Wilmington
Facing a potent Brooklyn lineup which featured a trio of Top 100 prospects, Adon more than held his own. The 22-year-old racked up a season-best 11 strikeouts as he worked his way through 5 2/3 innings. Adon did give up three runs on six hits and two walks, but overall it was a solid outing. Adon, who threw six scoreless in his previous start, has pitched to a 4.36 ERA through the first eight starts at the High-A level. Nationals prospects stats »

Pirates: Mason Martin, 1B (No. 14), Double-A Altoona
With five home runs in his first 122 at-bats, Martin was in search of the power that produced 35 long balls and 129 RBIs in 2019. The 22-year-old appears to have found it. Martin hit a pair of monstrous homers and collected a season-high three RBIs in Altoona’s loss. After going deep three times in a four-game span in May, the Washington native had cleared the fences just twice in his previous 22 games spanning 80 at-bats. Martin is batting .244/.317/.504 with 17 extra-base hits and 24 RBIs in 34 games. Pirates prospects stats »

Rangers: Yerry Rodriguez, RHP (No. 19), Double-A Frisco
Rodriguez lowered his ERA to 2.21 with his fourth straight scoreless start, a streak that’s lasted 12 innings. The 23-year-old threw 41 of his 70 pitches for strikes as he struck out seven, a season high, over four innings. Rodriguez gave up four runs and didn’t escape the second inning in his first start of the season, however he’s been lights out ever since. In the six subsequent starts, the right-hander has held opponents scoreless five times. In the other start, he yielded just one run. Rangers prospects stats »

Rays: Seth Johnson, RHP (No. 14), Low-A Charleston
Johnson’s penchant for putting up zeros continued Thursday in his first start since May 8. The 22-year-old’s ensuing five outings all came in relief, during which time he allowed one earned run over 17 2/3 innings. He added five more to that total against Myrtle Beach, striking out five. Johnson worked out of a bases-loaded jam in his fifth and final inning to lower his ERA to 2.42. Rays prospects stats »

Reds: Graham Ashcraft, RHP (No. 18), High-A Dayton
Whatever Ashcraft figured out after a poor outing on May 25 has worked, and worked splendidly as that was the last time the 23-year-old allowed an earned run. Ashcraft struck out seven and surrendered two hits and two walks in five scoreless frames, his fourth consecutive start without allowing an earned run. The right-hander has struck out 30 and walked six during that stretch which spans 23 innings. His ERA has dropped from 5.74 to 2.33. Reds prospects stats »

Red Sox: Tanner Houck, RHP (No. 6), Triple-A Worcester
Making his first appearance in more than a month, Houck struck out six over three hitless frames for Worcester. The 24-year-old walked one and tossed 45 pitches, 26 for strikes. Houck began the season in the Majors and made three appearances (two starts) before he was optioned to the alternate training site on April 19. He was touched for three runs on eight hits in three innings during his lone Triple-A start on May 4 before being shut down. Red Sox prospects stats »

Rockies: Ryan Feltner, RHP (No. 22), Double-A Hartford
Hartford’s offense made sure their hurler would enjoy a successful Double-A debut. Feltner struck out eight over 5 2/3 innings and the bullpen recorded the final out to escape a jam that preserved his scoreless debut. The 24-year-old yielded four hits and two walks while throwing 50 of his 82 pitches for strikes. Feltner was promoted to Hartford after going 3-1 with a 2.17 ERA and 45 strikeouts in 37 1/3 innings across seven starts for High-A Spokane. Rockies prospects stats »