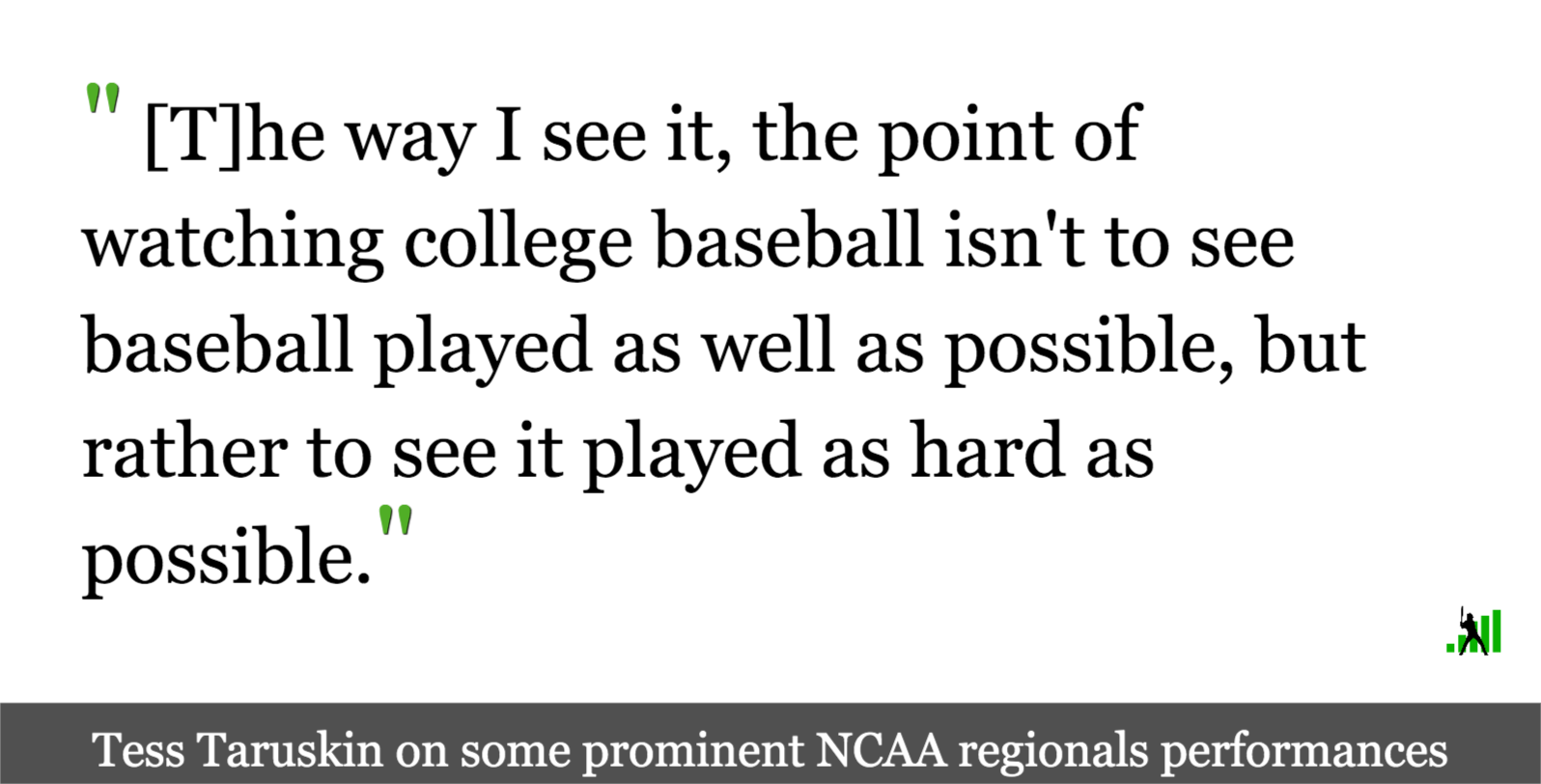 The Road to Omaha Is Paved With Score Inflations

Watching baseball can sometimes feel like watching a chess match, scrutinizing often-motionless players as they try to out-think one another. But if MLB’s brand of baseball is a Queens Gambit-esque affair – quietly self-serious, steeped in tradition, a bit stuffy at times – then college baseball is the more unpolished version you see played in Central Park, with moves coming in frenzied flurries from players who can sometimes seem more caught up in the moment than they are focused on gameplay. But as the NCAA Division-I baseball tournament heads into super regionals this weekend, who can blame these players for letting their emotions run high? There are a number of future major leaguers among the remaining players in the tournament, hoping to boost their draft potential as they attempt to lead their teams to Omaha. But there is also an undoubtedly larger contingent of players who can feel their days of playing competitive baseball dwindling, which can make for a score-enhancing combination of adrenaline-fueled offense and nervy defense.

A brief glimpse at the scores from last weekend’s action is enough to highlight the different brand of ball on display at the college level. There was an average of 12.8 runs scored in each game – a stark contrast to the anemic offensive landscape of the majors. But even with those inflated results, there was still pitching prowess aplenty, with many regular-season storylines stretching into postseason play, including those of much-discussed Vanderbilt starters Kumar Rocker and Jack Leiter. The two are expected to go early in this year’s draft (as early as first and second overall, by some estimates), and were unsurprisingly tapped to start the team’s first two games of the Nashville regional. Rocker started Game One, pitching seven scoreless innings and fanning nine as Vandy shut out Presbyterian, 10-0. In their next game, Leiter faced off against Georgia Tech starter Marquis Grissom, Jr., allowing the nostalgic among us to reminisce about the days when their fathers went head-to-head decades ago. Leiter allowed just one run, and struck out 11 batters over the course of his six innings of work; Vanderbilt went on to win 4-3.

Another pitcher looking to continue his 2021 regular season success was Kevin Kopps, whose stats for the Arkansas Razorbacks seem made up. In 2021, Kopps pitched 79.2 innings, all in relief, which is more than any other pitcher on the team, including the Razorbacks’ starters. Over the course of those 79.2 innings, Kopps struck out 120 and walked only 15, while allowing just six runs (I promise this is real). He carried that dominance into the Fayetteville regional, where over the course of three appearances, Kopps pitched a whopping 13.1 innings out of the bullpen, allowing no runs on six hits and fanning 15.

There’s a pretty significant caveat with Kopps: his age. He was a redshirt freshman then underwent Tommy John surgery, which earned him a medical redshirt his sophomore year. The pandemic then added another deferred year to Kopps’ college career, which means that though he is indeed a college senior, he’s also 24 years old. It’s hard not to at least partially credit the effectiveness of his stuff against college hitters (his slider in particular) to his physical maturation compared to his competition. It doesn’t hurt that Kopps is backed up by the top-ranked team in the 64-team tournament.

But Arkansas’ was not the most dominant first round team performance. That distinction belongs to Notre Dame, who hosted the South Bend regional, earning the No. 10 overall seed in the tournament. The other teams in South Bend each had reason to be hopeful that they could triumph over the hometown favorites: Connecticut’s sophomore outfielder Kyler Fedko was named Big East Player of the Year with an impressive slash line of .411/.495/.697 during the regular season, the best of any player in South Bend that weekend; Central Michigan’s Andrew Taylor boasted a better ERA (1.81), WHIP (0.93), and K/BB (5.21) than any other pitcher in attendance; and Michigan came into the weekend with arguably the most pitching depth in both their starting rotation and their bullpen. But by the end of the first round of the tournament, Notre Dame would make it seem as though none of that mattered.

The Irish played only three games (out of a possible five, given the double-elimination structure), and still wound up with what was by far the largest run differential of any of the regionals, outscoring their opponents by a staggering 50-5, winning their games 10-0, 26-3, and 14-3 respectively. For comparison, here’s how that stacks up to the rest of the weekend’s results:

Without question, the most noteworthy performance on the field was that of Notre Dame first baseman Niko Kavadas, who had proven himself a crucial ingredient to the team’s success during the regular season. In 2021, Kavadas led the ACC in slugging (.790), ranked third in both home runs (20) and RBI (61), and fifth in walks (43). Heading into the tournament, however, his bat had cooled significantly, going only 2-for-22 in the six games preceding the regional. But whether it was due to the pressure release that came with being moved down to sixth in the order, or the adrenaline kick that must have come from playing in the postseason for the team he grew up cheering on (Kavadas is from nearby Granger, Indiana), the slugger wasted little time getting his offensive groove back. In their first game on Friday, Kavadas went 2-for-4, with two 2-run home runs. He struck out twice that night, but those would be his only Ks of the entire weekend. On Saturday, he went 3-for-4, hitting two more home runs, a three-run jack and a grand slam, and earning two walks, one of which came with the bases loaded. On Sunday, Kavadas moved back up to fourth in the order to close out the weekend; he went 1-for-2, tacking on one more home run, while walking four times (only one was explicitly intentional).

Kavadas is looking to stay hot as he and the rest of the Irish take on Mississippi State in the super regionals, which kick off this afternoon, along with the 15 other matchups that emerged from last weekend’s action. There’s still too much baseball to play between now and the College World Series for me to make any predictions about where this postseason is ultimately headed. But the way I see it, the point of watching college baseball isn’t to see baseball played as well as possible, but rather to see it played as hard as possible. That much is sure to continue.

Tess is a contributor at FanGraphs. When she’s not watching college or professional baseball, she works as a sports video editor, creating highlight reels for high school athletes. She can be found on Twitter at @tesstass.