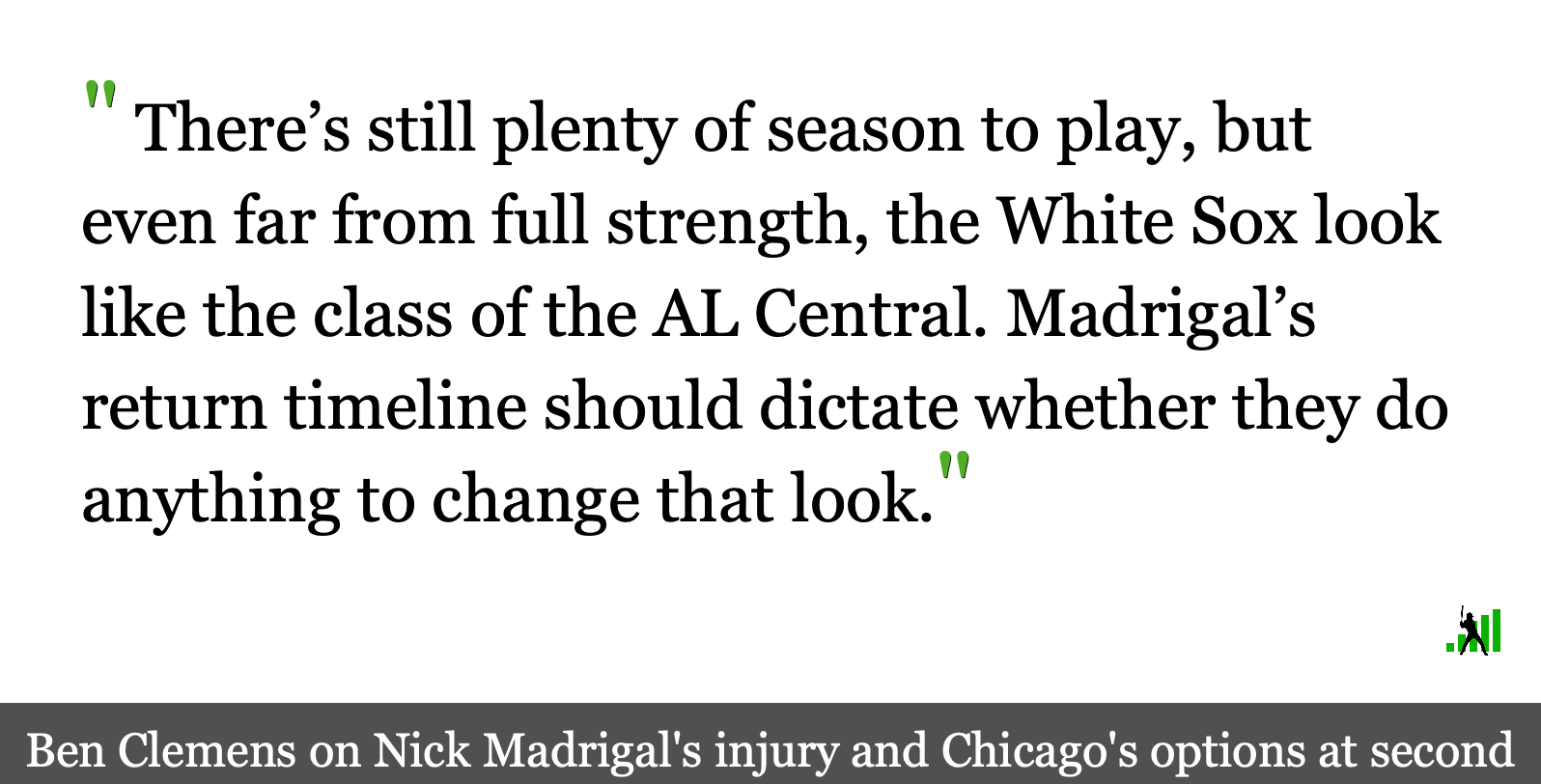 Can the White Sox Find a Madrigal Replacement?

On Wednesday night, Nick Madrigal hit a groundball to third base. That’s a normal state of affairs; he’s fourth in the majors in total grounders so far this year. While hustling down the line, however, he tweaked something in his leg and pulled up slightly. It looked like it might be a nagging injury, but the truth turned out to be far worse: Madrigal was diagnosed with a complete tear of one hamstring tendon and a partial tear of another, and the Sox have placed him on the 60-day IL.

Madrigal and the club have a decision to make. A surgery to fix the tears would end his season. The earliest timeline for rehabilitation, though, would place him back on the roster around the end of August, and there’s no guarantee that rehab would go smoothly. The final decision on whether to opt for surgery won’t come this week, but in the meantime, it’s not too early to consider what it means for the AL Central-leading White Sox.

Whether batting at the top or bottom of the lineup, Madrigal had been a spark for Chicago this year. His contact-focused, all-fields grounder game doesn’t resemble the way that baseball is played in the major leagues today, but that doesn’t make it any less effective. Hitting everything you swing at and running like mad afterwards is an effective strategy, particularly when you don’t have power to rely on as a backup. It’s worked to the tune of a .305/.349/.425 line so far this year, good for a 118 wRC+.

Some of the component stats are downright hilarious. Madrigal’s 7.9% strikeout rate is absurd; his 5.1% walk rate is comparatively normal but still much lower than league average; his 3.03 GB/FB ratio ranks fourth in baseball. His 3.7% swinging-strike rate is second only to David Fletcher, and his 91.8% contact rate is the best mark in the majors. If you’re not going to hit the ball hard or at least in the air, you need to make up for it by putting a ton of balls in play, and Madrigal unquestionably does that.

Of greater concern to the White Sox than how he arrives at his offense, however, is how much offense he provides. That’s mostly covered by the 118 wRC+, and that’s a big chunk of offense to replace. Only eight players we list as second basemen have bested that mark, and that includes Max Muncy, Chris Taylor, and Jazz Chisholm Jr., who all get a decent amount of playing time elsewhere on the diamond.

That doesn’t take into account defense, and while defensive metrics don’t agree on Madrigal (UZR and OAA like him, DRS doesn’t), his speed and smooth work with the glove are universally praised by scouts and team executives, not to mention teammates. He looks to be a plus defender at the position, another tough thing to replace midseason.

The Sox have two in-house options that will at least function as short-term replacements in Leury García and Danny Mendick. The former has primarily played the outfield this year due to Chicago’s ongoing health issues there, but he’s also a credible infield defender. Mendick is more of an infielder than an outfielder, though he too has been pressed into service in right field due to the aforementioned outfield woes. Both will get time at second base, and Mendick drew the start in the first game the team played after Madrigal’s injury.

In the short term, that appears to be enough for Chicago. The team called up Brian Goodwin to replace Madrigal on the active roster, but it’s not a like-for-like replacement. Goodwin primarily plays center field, which had been García’s spot after injuries to Luis Robert and Billy Hamilton. Placing Goodwin in center frees up García to rotate between the outfield and second base, in addition to spelling shortstop Tim Anderson. Mendick, meanwhile, will likely draw starts against left-handed pitching.

To put it bluntly, it’s an insufficient replacement for what the Sox lost. García has a Madrigal-esque paucity of power, but he strikes out quite frequently: 24.4% of the time this year and 24.1% for his career. That results in a below-average overall line; he’s a career .255/.292/.354 hitter and is slashing .236/.291/.298 this season with underlying statistics that suggest more of the same is likely.

Mendick has slightly more power but still not enough to make up for his strikeouts. He’s hitting .190/.288/.293 on the year, and our projections don’t think he’ll get much better. Madrigal was fourth among White Sox hitters in WAR; García and Mendick have been roughly replacement level. That’s a serious downgrade in production — perhaps two wins overall — in a division that was expected to be quite close.

Luckily for the Sox, it was only expected to be close. The Twins, their closest pre-season competition, have been downright awful this year; they sit at 24–37, miles back of playoff contention. Per our playoff odds, Minnesota has only a 1.8% chance of winning the division even after Madrigal’s injury. That has made Chicago’s path to the playoffs far easier, even with their bad injury luck.

The two closest competitors at this point are Cleveland and Kansas City. The former is up to its usual tricks: not scoring many runs and relying on the pitching staff. It’s been working so far, but only sort of; Cleveland is 32–27 but has been outscored by 12 runs on the year and is projected to play roughly .500 baseball the rest of the way. That’s likely not going to be enough juice to catch the Sox, who have the third-best record in the AL and the best run differential.

If it’s not Cleveland, could it be Kansas City? In a word, no. In two words, probably no. The Royals have been a pleasant surprise so far this year, but even so they’re only 30–31 and have been outscored by 18 runs on the year. They have multiple holes on their team; with Whit Merrifield mostly playing infield, the outfield has been subpar, and the less said about their third base situation, the better. When Kevin Goldstein provided some sample trade deadline scripts, he expected the Royals to look for more starting pitching, and that was supposed to be their strength!

Quite frankly, I think that the White Sox are in an excellent position to weather an injury to Madrigal. They have the largest division lead in baseball, and their closest competitors are more middling hopefuls than slow-starting juggernauts. They also have the luxury of waiting to make any moves until it’s been determined whether Madrigal will return this year, and even after they know how that turns out, they’re under no time constraints. A few weeks of García and Mendick manning second base is unlikely to sink the ship.

If Madrigal is out for the season, however, Chicago should give strong consideration to an external upgrade to bulk up the lineup for a potential playoff run. Several down-and-out teams have marketable second basemen, and none appear too costly to make sense. Adam Frazier, Jonathan Schoop, Josh Harrison, Eduardo Escobar, and Asdrúbal Cabrera will all likely be on the block, and all five would likely represent an upgrade on the status quo.

Frazier is the most interesting name of the group. The longtime Carson Cistulli favorite has been stellar so far this year, posting a BABIP-aided .329/.391/.471 line in 266 plate appearances for the Pirates. He’s middling defensively and not a perfect fit because he’s also under team control for next year, when Madrigal will be back. But that’s a nice problem to have; Frazier has played nearly 1,000 innings in the outfield in the past and can moonlight at shortstop or third base in a pinch. He feels almost like a one-for-one replacement, boasting the same high-contact game that Madrigal employs, and looks like a high-floor option with a reasonable price tag.

Schoop is nothing like Madrigal, but he’s been a solid performer for years and will likely fetch a smaller return. He’s second base only, which limits the team’s versatility, but he’s also a free agent after this year, which means he wouldn’t overlap with Madrigal assuming the latter has season-ending surgery. He’d also add to the team’s power, and while most lineup interactions are well captured by team wRC+, adding homers to a team with the second-highest OBP in the majors doesn’t sound like a bad way to score runs.

Harrison was solid last year for the Nationals, then signed a one-year contract to stay in D.C. and has delivered more of the same so far this year. It’s not an exciting offensive package, but like Schoop, it works out to roughly average production. I’d be skeptical of this acquisition, though; Harrison has been leaden in the field so far and has had intermittent injury issues of his own. It would hardly do to trade for an injury replacement only to find them hurt as well.

Escobar looked cooked last year, but his power has returned in a big way in 2021; he’s smashed 14 home runs already. It looks somewhat real, too, as he has career-high barrel and hard-hit rates. He’s also incredibly versatile defensively, though that’s less important given that he’d presumably be an everyday second baseman in the event of a trade.

To unlock that versatility, the Sox could always do some more shopping in the same aisle and consider Cabrera, his Arizona teammate. He hasn’t played second base in two years, and at 35, he’s gone from slow to plodding, but if Chicago thinks he can handle the position at least part of the time, his bat certainly plays. He’s walking at a career-best rate so far this year, which looks unlikely to continue, but he’s been a steady offensive presence for his entire career, and nothing in this year’s numbers makes that seem likely to change.

If Madrigal opts for surgery and misses the remainder of the season, I’m partial to the idea of trading for Frazier. If the cost proves unpalatable, though, I think the pair of Diamondbacks sluggers would make a nice replacement. They would require two roster spots, but the Sox are awash in marginal players at the moment; Mendick, in particular, would be superfluous with Escobar and Cabrera. That would give the team more firepower in the playoffs, more ability to mix and match defensively, and more veteran leadership, a tenuous quality that skipper Tony La Russa would no doubt appreciate anyway.

It’s rough to see one of your team’s best players go from electric to unavailable in a night. It’s been happening uncomfortably often on the south side of Chicago this year. Luckily, though, the team is good enough and has banked enough of a lead that this injury doesn’t feel as costly as the ones that felled Robert and Eloy Jiménez. There’s still plenty of season to play, but even far from full strength, the White Sox look like the class of the AL Central. Madrigal’s return timeline should dictate whether they do anything to change that look.

Ben is a writer at FanGraphs. He can be found on Twitter @_Ben_Clemens.