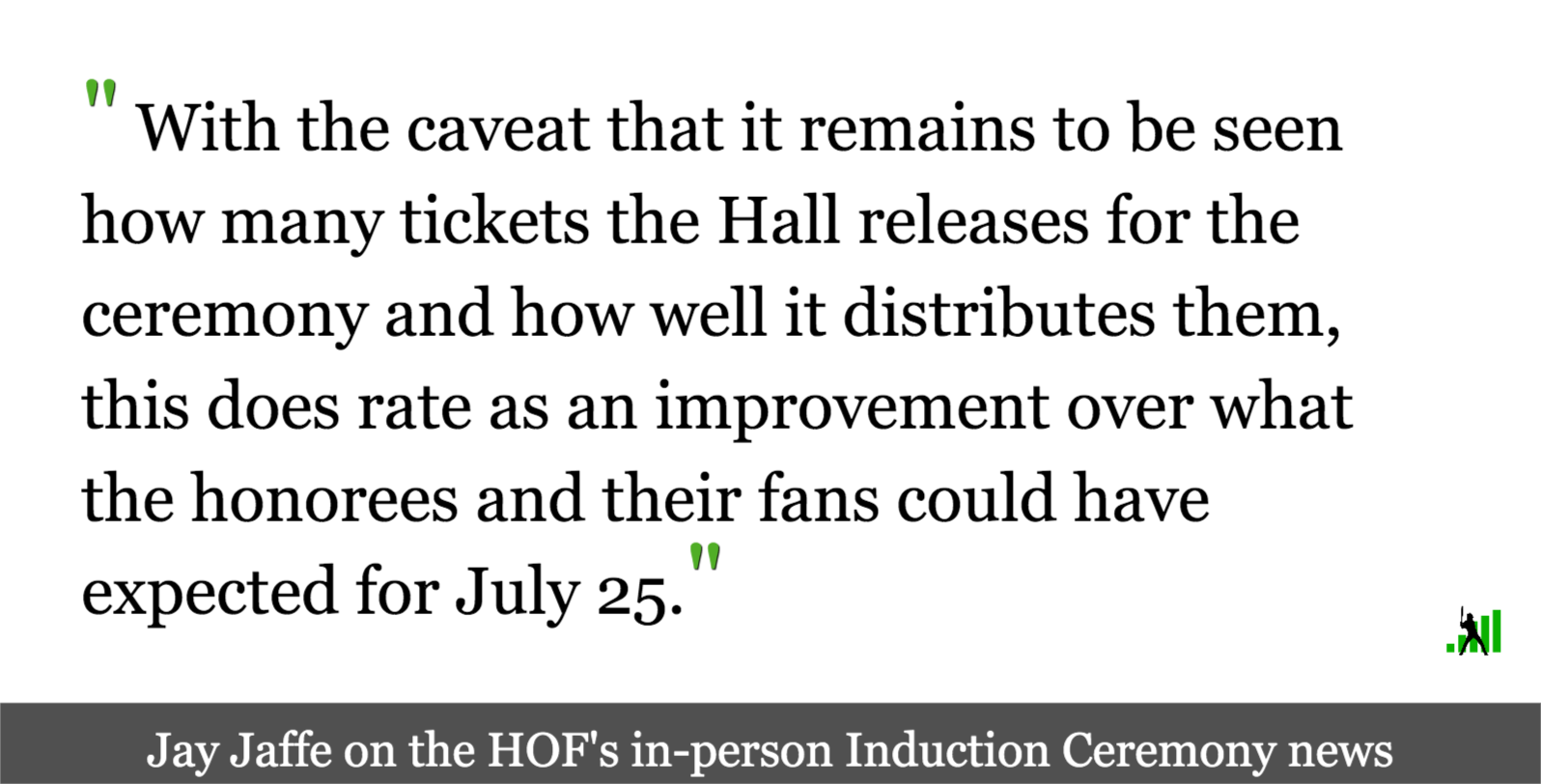 Back in February, the Baseball Hall of Fame announced that after postponing last year’s Induction Weekend festivities due to the coronavirus pandemic, it would host an Induction Ceremony this year, albeit with a catch. The July 25 festivities to honor 2020 electees Derek Jeter, Marvin Miller, Ted Simmons, and Larry Walker wouldn’t be open to the public, due to “the continuing uncertainties created by COVID-19,” and likewise for its Awards Presentation, with most other festivities associated with the Hall’s signature weekend cancelled entirely. With significant progress made in combatting the pandemic — falling infection rates, more than half of U.S. adults fully vaccinated, and many restrictions for large outdoor gatherings lifted — on Wednesday the Hall changed course, announcing that it will hold an outdoor ceremony at 1:30 pm ET on September 8, as a ticketed event with limited crowds.

The Induction Ceremony will be held on the lawn of the Clark Sports Center, the site of all inductions since 1992, but while lawn seating will be free, tickets will be required. The reconfigured ceremony is designed to comply with heath and safety guidelines set out by the state of New York and the Centers for Disease Control. It’s all but guaranteed to curb attendance well below the pre-pandemic expectations for a crowd of at least 50,000 (a level surpassed five times from 2014-19) that perhaps would exceed even the 55,000 who showed up to see Mariano Rivera and his classmates inducted in 2019. That was the second-largest induction day crowd ever, after the 82,000 who attended in 2007, when Tony Gwynn and Cal Ripken Jr. were inducted. Holding the ceremony on a Wednesday, and decoupling it from the Awards Presentation usually held the day before inductions, will further reduce the crowd.

An undisclosed number of tickets will be available via the Hall’s web site beginning at 11 am ET on Monday, July 12, with seating areas designated for vaccinated and unvaccinated ticket holders. The Hall has not offered specifics regarding the latter group, but according to current New York State health guidelines, for outdoor gatherings of more than 500 without social distancing, proof of vaccination status will be required. Unvaccinated individuals do not have to present proof of recent negative COVID-19 test results but masks are required and can only be removed “while maintaining social distancing of six feet and, if in an event or gathering setting, seated.” That’s still a less restrictive set of requirements than is currently in effect at Yankee Stadium, for example, where all fans must take a PCR or antigen COVID-19 test or provide proof of a COVID-19 vaccination, and must also pass a temperature check and wear face masks except while actively eating or drinking at their seats.

The health and safety guidelines may well change, and the Hall is expected to spell out its policies in detail by the time tickets are made available. As their press release notes, “Planning continues to be adapted to guidelines set forth by the Centers for Disease Control and the State of New York.”

As for the progress that’s been made in fighting COVID-19, via data from Bloomberg’s COVID-19 Tracker and Johns Hopkins University, when the Hall announced its plans for a pared-down ceremony on February 12, just 7.5% of the U.S. population was fully vaccinated, and likewise for New York state, but as of June 9, those rates have risen to 47.6% and 54.3%, respectively. Meanwhile, the national seven-day average for the daily COVID-19 case count was 293 per million people (down from a peak of 751 per million on January 11) and the New York state rate at 470 per million (having peaked at 854 per million on January 12), but the national average has dropped to 46 per million, and the state average to 30 per million.

Admittedly, a midweek Induction Ceremony with limited capacity is an imperfect staging for one of baseball’s marquee events, but unlike the previously planned indoor, made-for-television event, it will quite literally give Jeter, Simmons, Walker, and whomever is on hand to represent the posthumously elected Miller (it’s complicated) their day in the sun. Truth be told, by moving from late July to early September, the risk of the event becoming a high-heat endurance test is reduced, as is the likelihood of precipitation; the average high temperature in Cooperstown in September is 68 degrees, nine degrees lower than in July, and the average precipitation is slightly less, though the average low drops from 58 degrees to 50 in that same span.

Beyond weather considerations, the revised plans for induction will bring fans and Hall of Famers back to Cooperstown in significant numbers, restoring the sense of community that the festivities create with their annual pilgrimage to baseball’s Mecca.

The pandemic forced that community to forgo its pilgrimage last year, and with it hit a tourist-centric region particularly hard. The estimated economic impact of the cancellations of Induction Weekend and the Cooperstown Dreams Park season (which annually brings over 17,000 youth players for a series of weekly tournaments over the course of the summer) on the area’s restaurants, hotels, and rental properties as well as the baseball-oriented shops on Cooperstown’s Main Street ranged from $50 million to $150 million. Last year was the first time since 1960 that no induction ceremony was held, that because neither the baseball writers or the Veterans Committee elected anyone that year.

That was actually the case in 2021 as well, as the BBWAA voters pitched their first shutout since 2013, and the Hall postponed the meetings of the Early Baseball and Golden Days Era Committees while deeming remote meetings for the purpose unsatisfactory. Thus there’s a level of serendipity with the 2020 class — the BBWAA-elected Jeter and Walker, the Modern Baseball Era Committee-elected Miller and Simmons — available to fill the vacuum.

Meanwhile, the Hall will stick to its planned July 24 date to honor two years worth of winners in its indoor, television-only Awards Presentation. Ken Harrelson (2020) and Al Michaels (2021) will receive the Ford C. Frick Award for broadcasters, while Nick Cafardo (2020) and Dick Kaegel (2021) will be receive the Baseball Writers’ Association of America Career Excellence Award (formerly the J.G. Taylor Spink Award), and David Montgomery will receive the 2020 Buck O’Neil Lifetime Achievement Award. Alas, the honors for Cafardo and Montgomery are posthumous, as the former, a longtime Boston Globe writer, died on February 21, 2019, while the latter, a former Phillies owner, died on May 8, 2019. The award winners or their representatives will be invited back to Cooperstown to be recognized at the Induction Ceremony.

With the caveat that it remains to be seen how many tickets the Hall releases for the ceremony and how well it distributes them, this does rate as an improvement over what the honorees and their fans could have expected for July 25. The Hall has been proactive in its pandemic-related scheduling, postponing events months in advance instead of taking a wait-and-see approach, and keeping fans and honorees — including the living Hall of Famers, a high-risk group given their ages — out of situations with clearly elevated risks. Here it’s shown that it can adapt to improving conditions as well, and while it’s not going to be quite the ceremony that most envisioned, it still offers a reason for people to get together and celebrate baseball in Cooperstown.

Brooklyn-based Jay Jaffe is a senior writer for FanGraphs, the author of The Cooperstown Casebook (Thomas Dunne Books, 2017) and the creator of the JAWS (Jaffe WAR Score) metric for Hall of Fame analysis. He founded the Futility Infielder website (2001), was a columnist for Baseball Prospectus (2005-2012) and a contributing writer for Sports Illustrated (2012-2018). He has been a recurring guest on MLB Network and a member of the BBWAA since 2011. Follow him on Twitter @jay_jaffe.